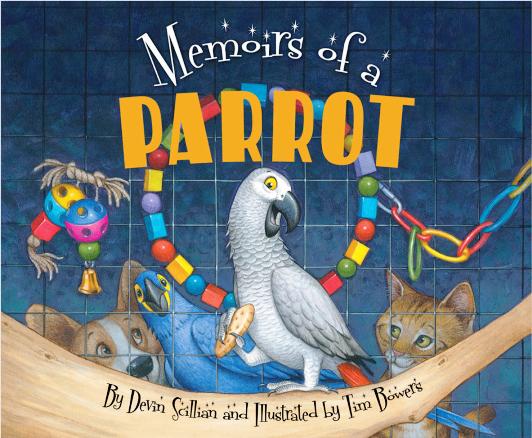 Anyone who loves to laugh will thoroughly enjoy the latest installment in author Devin Scillian’s “memoir” series of picture books. This one is called Memoirs of a Parrot, and it will have readers young and old laughing until they cry.

In the book, a delightfully snooty African Gray parrot named Brock offers young readers a beak-full of information about his day-to-day life, which includes talking to his parrot friend Tik Tok about “rude people staring into his cage, dogs that yap all day, fish that don’t even try to say anything, and people who seem to think his name is Polly.” Brock complains that these rude people keep offering him a cracker—which, of course, he does not want. They also keep asking him his name, but when he says “Brock!!” instead of “Polly,” they just look disappointed.

By day five of Brock’s memoir, he is adopted by a man named Todd who lives in a tiny house and plays the ukulele. Brock can only barely stand the noise—and the crackers that Todd keeps offering him, but soon enough (day fourteen, actually), Brock discovers that Todd is getting pretty good on the ukulele. It’s only when Brock is trying to toast one of his crackers and sets the toaster on fire that he realizes what Todd really means to him.

This is a delightful book about sameness and change and learning how to deal with new places and new personalities. The text is hilarious from the first page to the last, especially the exchange between Todd and Brock when Todd keeps asking Brock to say his name (“Echo”) and Brock keeps complying by screeching, “Brock!”

Artist Tim Bowers’ illustrations expertly capture the precocious little African Gray’s mannerisms, from the condescending tilt of his head as he gives pet shop visitors “the stink-eye”, to the naughty expression on his face as he prepares to toss an unwanted cracker back at Todd, to his carefree abandon as he finally croaks out a song with his life-long companion.