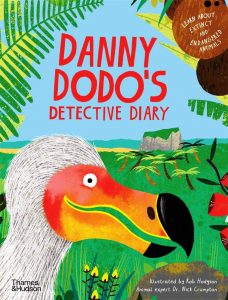 A Dodo detective is the perfect sleuth to teach young children about extinct and endangered animals! In animal expert, Dr. Nick Crumpton’s newest oversized picture book, Danny Dodo’s Detective Diary, a photogenic gent named Danny takes readers on an odyssey to discover the story behind extinct birds and animals. BUT FIRST, he explains the difference between vulnerable species, endangered species and extinct species. Then he reminds readers that while extinction isn’t new, it has become worse with climate change, over-hunting and loss of habitat (damaging the places where animals life).

Once the basics of extinction, near-extinction and negative human influences are out of the way, Danny offers specific accounts of once-thriving species that no longer exist, like dwarf elephants, Steller’s Sea Cow, and the Tasmanian Tiger, to name a few. These species were hunted, eaten, or killed for their fat and even their feathers. Danny Dodo tells of the Yangtze River dolphin, which was over-hunted and eaten because people believed their meat would give protection from evil spirits, and he even shares the rude tale of what happened to his own species — the Dodo bird — which were eaten by humans, and which also fell prey to the animals humans brought to their habitat with them. 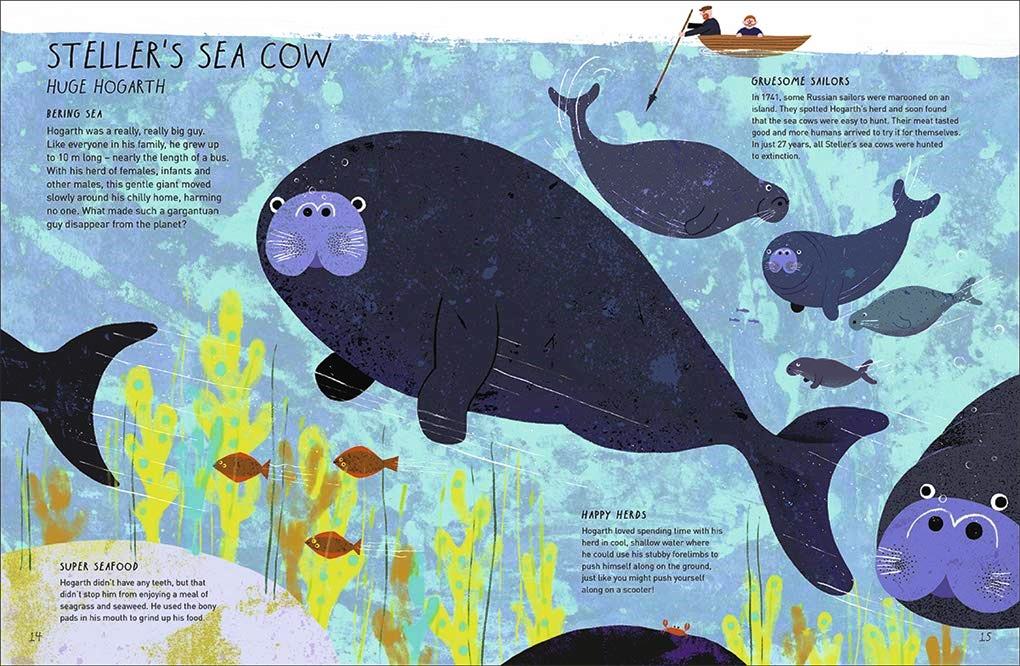 This is a lively and informative book about what the past looked like, and how the future will look if humans do not learn from their own mistakes and stop over-hunting various species. Although the subject matter (the extinction of once vibrant animals that deserved to live just like other animals) is a bit morbid when you think about it, the author still manages to make the information lighthearted and interesting. Artist Rob Hodgson’s illustrations are colorful and full of movement, and are sure to keep young readers turning the page.

Use this book as supplemental reading for learning units on extinction, preservation, and the study of wildlife, or as part of your environmental studies curriculum. Enjoy!