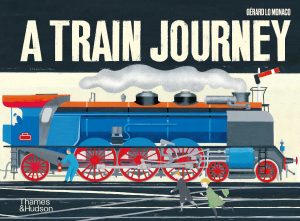 Everybody loves a good train ride, and author Gerard Lo Monaco provides that and more in his new pop up train history. It is called A Train Journey, A Pop-Up History of Rail Travel, and it is a feast for the eyes of train lovers of all age.

With the flick of a tiny wrist, young train lovers can begin their journey back through time. The first stop is The Rocket, a brand new steam engine developed by engineer George Stephenson and his son Robert that could pull a load of 13 tons over a distance of 35 miles. It chugged along at a whopping 12 mph!

Next, the author unravels the legend of the New York El Train, divulging to those who are unfamiliar with public transportation in New York that “El” is short for “elevated railway.” Readers learn that the El Train was first suggested by surveyor John Randel and inventor John Stephens, who felt that building an elevated railway “would ease traffic on Broadway and other busy streets.” However, it was actually designed by Mr. Charles T. Harvey, and opened for business in 1870. 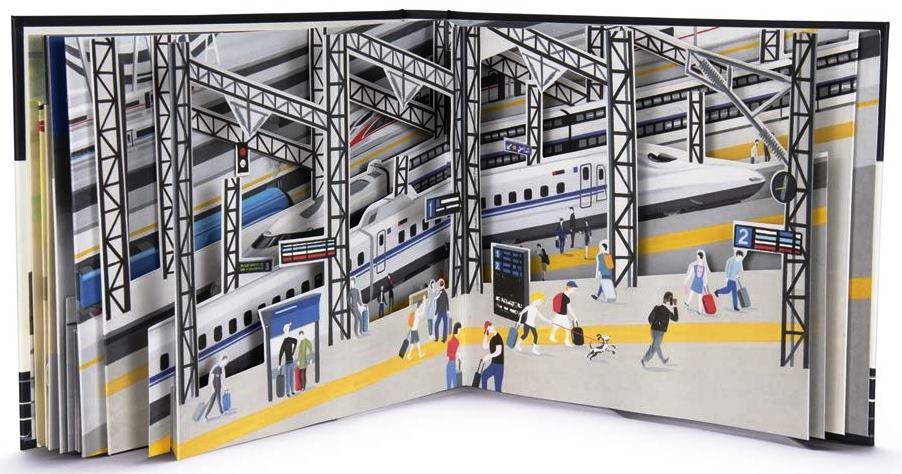 There are other lovely trains in this series, like The Flying Scotsman, which traveled from London to Edinburg in eight hours (quite a feat for the year 1862), The Shinkansen Bullet Train, which was opened to coincide with the 1964 Tokyo Olympics, and the TGV (Train a Grande Vitesse) of France, which reached a top speed of 198 mph in 1972.

This is an eye-catching book that is perfect for train lovers of any age. The vocabulary is a bit advanced for the very young, but the very young can learn things about the trains WITHOUT the vocabulary. This is because each popup is exquisitely, meticulously presented, from the clothing the people wore to the types of animals they tugged along behind them. These wordless popups are enough to fire the imagination and start children to talking whether they can master the vocabulary or not.

ONE QUIBBLE: Each of the four popups open to intricate scenes at the respective train stations, but for some reason, the name of each train is omitted from the scene. Readers have no idea what train they are examining until they close the popup and check directly behind it, where all the identifying information lies. This seems like an unnecessary step and may prove a bit frustrating to readers.

Other than this quibble, the book is neat, intricately detailed, and vibrant enough to keep readers engaged for quite some time.