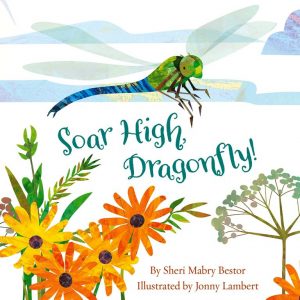 Author Sheri Mabry Bestor is known for breathing excitement into the mundane lives of insects. She did it three years ago when her book, Good Trick, Walking Stick debuted, and now she’s doing it again with her newest picture book: Soar High, Dragonfly!

Even before the first page, readers are invited into the colorful forest. There are pink and yellow flowers, lush green leaves, blue water, and birds tweeting their hearts out among the branches. There is also the handsome green and blue dragonfly, wings making a humming sound as she whips through the trees and prepares to lay her eggs.

Using clever and lively onomatopoeia, readers hear the pop, pop, pop of dragonfly eggs as they land in the pond and on the water plant. When the rains come, the eggs seep into the pond, where they float on the surface. Even though some are eaten and some are washed away, this is not their most vulnerable state; that comes later, after the dragonfly becomes a water nymph, then molts, then exits the water to dry out on the reeds. Because his wings are too wet to fly, he is an easy meal for predators. Thankfully, it doesn’t take long to get those wings dry, and off he goes on his own adventure.

Even readers who don’t especially like insects will enjoy Soar High, Dragonfly. Artist Johnny Lambert’s lively and colorful illustrations will entice young children to go on a backyard adventure and older readers to remember what it was like to go walk-about. Readers learn all sorts of things from Ms. Bestor’s prose, including the fact that dragonflies fly forward and backward and hover in the sky; each of their eyes has 25 lenses and can rotate 360 degrees; and they adjust the tilt of their wings at night to catch the warmth of the fading sun.

Use this fun and informative book as supplemental reading in science class, as an inspiration for art class, or as friendly fodder for budding environmentalists.