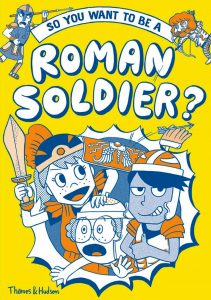 All the movies we have ever seen about Roman soldiers were those that depicted strength, authority…and maybe just a hint of cruelty. But how can we know what it was really like to be a Roman soldier? Reading author Philip Matyszak’s new chapter book, So You Want to Be a Roman Soldier, may certainly help!

In the book, three students are visiting a history museum and wondering about what it was like to live in Roman times. So they head to the nearest library, where the librarian gives them “career advice” materials on becoming a Roman soldier. From the start, they learn that Roman soldiers were powerful, wealthy, and well-traveled. They learn the criteria for being a Roman soldier, which includes required height, citizenship, marital status and physical health.

From there, students learn about Roman footwear, destinations, typical and favorite dishes, and even what activities they can expect to do on the weekends. They examine clothing, armor, weapons, and even training exercises. But perhaps more than this, they learn about themselves by taking quizzes that reveal their own character when they are asked what type of leader they would like to follow and what types of places they would like to invade and conquer.

This is another VERY clever book that allows students to immerse themselves in history while having learning other cultures at the same time. It is the second book in the interactive “So You Want to Be a” series. Like So You Want to Be a Viking, it is great for use in social studies and history classes because it helps children live history and find out about their own character while they’re learning. Like its fraternal twin, the prose mentions blood, plundering and gore, but the smiling illustrations are a big clue to children that this is all just make believe.

Use this book to study early occupations, early world history, and law and order. It can even be used to inspire creative writing. Enjoy!