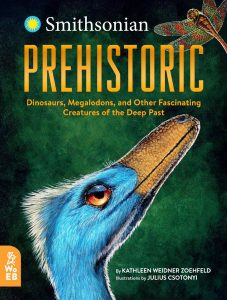 Dinosaur-lovers will be happy that there is a new picture book to add to their collection. It is written by Kathleen Weidner Zoehfeld, and is aptly called Prehistoric Dinosaurs, Megalodons, and other Fascinating Creatures of the Deep past because that is just what it’s filled with: a plethora of dinosaurs from Earth’s mysterious past.

The book opens by explaining that humans of today live everywhere on planet Earth, but by traveling backwards in time, we see a very different, very mysterious world that was filled with amazing creatures. Readers learn about the Ice Ages, and what life forms thrived there; the Pleistocene era, with its giant sloths and Saber-toothed cats. Then there was the Neogene era, with its horned gophers; the Paleogene era, when the first primates took to the trees; and the Cretaceous era, when duck-billed dinosaurs and other “armored” mammals ruled the earth.

Although this book does not necessarily introduce any new material for dinosaur-lovers, it does present mammoth-sized illustrations by Julius Csotonyi that are sure to fire young children’s imaginations.

This is a most informative book that deserves a place on the dino-lover’s bookshelf. There is a quite lengthy TOC (Table of Contents) that outlines every living thing from the Ediacaran era (4.4 billion years ago) to the Anthropocene era (present day). There are even some familiar eras, like the Jurassic era (think Jurassic Park!).

There is a detailed Glossary, a convenient Index, and a picture index at the very back that classifies what readers are seeing on the pages. For example, P. 19 shows to “dinosaurs” fighting, but this chart explains that one of the dinos is classified/named/labeled as Gorgosaurus, and the other is Spinoss.

Use this book as an extension of other dinosaur encyclopedias, or as supplemental reading for students who are interested in the subject.