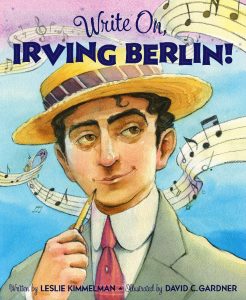 Anyone searching for proof that immigrants can come to America, make their mark, and leave the country better than they found it, can find the answers to their questions in the new Leslie Kimmelman picture book biography for grades 1 through 4, called Write On, Irving Berlin.

The book opens to five-year-old Israel (later known as Irving) Berlin fleeing war-torn Russia after his family’s home is burned down right before his eyes. Israel works hard to fit into American life, but his studies suffer because he spends his time singing… and daydreaming about singing. He gets the chance to sing to his heart’s content when extreme poverty forces him to drop out of school and go to work at age thirteen. He sings to his customers, and also takes this time to pen his very first song: “Marie From Sunny Italy.”

Although that first song is reportedly not very good, Irving gets better at writing lyrics. He cannot read or write music, but this doesn’t stop him from trying his hand at composing his own music, too. His songs are an amazing hit! “Alexander’s Ragtime Band,” “God Bless America,” and even the still popular “White Christmas,” were all written by Irving Berlin.

So much history is blurred or completely lost over time, but this wonderful book by Leslie Kimmelman brings a big chunk of it back to our remembrance — and it does it in only 32 pages! It should be noted that the prose is a bit wordy; however, the fact that it offers so much amazing history effectively cancels out this quibble. The soft and nostalgic illustrations by David C. Gardner whisk readers back to the hustle and bustle of early America.

Use this book as a supplemental “filler” for early American history. It should do well in Music classes, History classes, and Social Studies or Citizenship classes.