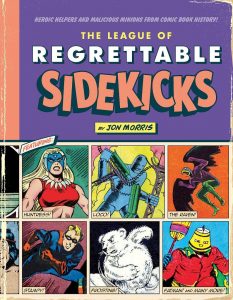 Dynamic duos have always been cool. Think Batman and Robin; the Green Hornet and Cato, Captain Kangaroo and Mr. GreenJeans…you get the picture. But what about the duos where the sidekick is a complete unknown? Without a great backstory a sidekick is nothing more than a whisper on the wispy wind; a nameless, fleeting shadow that fades into the dusty woodwork of comic book history.

Author Jon Morris proves this unfortunate theory in Book #4 in the Comic Book History series, The League of Regrettable Sidekicks: Heroic Helpers and Malicious Minions from Comic Book History Highlights. Morris opens the book by explaining what every avid comic book reader should already know: that the superhero’s fundamental need for a sidekick dates back past the Green Hornet and Kato, Fu Manchu and his Si-Fan assassins, Robin Hood and his Merry Men, and even earlier than that.

Morris quickly launches into a blow-by-blow account of the highs and lows of regrettable, forgotten sidekicks from the Silver, Golden and Modern Ages of comic book hero-dom. Readers meet curious crime fighters like “Bomber” Billy the Bumper, ornery goat-mascot for The Defense Kids (whoever they were!); and Blargo the Lawless, a pudgy, “scrambled-egg-faced” crime fighter with a fierce fighting style that is perfect for protecting his superhero partner, Futura (whom he pesters to the point of sexual harassment). 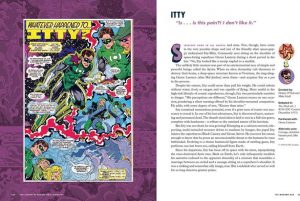 There is also the hilariously-named Dandy Doodle, son and sidekick of Yankee Doodle Jones, an unfortunate who has just been injected with almost all of a hypodermic needle-full of “strength-enhancing corpse juice” that gives him super powers. In the ultimate “I-wanna-be-just-like-my-dad” move, Dandy injects himself with the remainder of the putrid juice and becomes his forgettable father’s living-dead sidekick.

There are over 250 pages of weird and wacky sidekicks, like Frosting, the baby polar bear (sidekick to Norge Benson); Papa, the bald and stupid father (and sidekick) of his superhero son, Junior Genius; Klonsbon the Foozle—a bird-like being who HATES being referred to as a bird, sidekick to Cap’n Quick; and Jaxxon, the green-tinged meat-eating rabbit who is sidekick to Hans Solo and the Star Hoppers.

Morris began shining the spotlight on this delightful collection of regrettable sidekicks (and superheroes!) in the 1990s, when he managed a blog called Gone & Forgotten that scrutinized the “lowliest and most unfortunate stories and characters comic books have offered.” Since then, he has offered the comic-loving masses collectors’ volumes that are rich with detail and brimming with humor and sound effects like “OOF,” “KLANG,” and “EYOWWW!”

The League of Regrettable Sidekicks is a clever side-splitter that offers a chronological examination of forgettable sidekicks from the early days of comics until the time their reign came to an end. In terms of research, detail, and revival of long-lost characters, this book holds its own with any comic bible, comic encyclopedia and/or collectors’ series out there, and deserves its own place in the comic book landscape.

A variation of this review can be found on: https:// www.nyjournalofbooks.com /book-review/league-regrettable-sidekicks