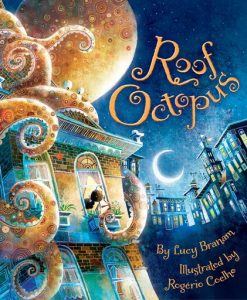 The only thing bigger than a young child’s imagination is when that young child imagines a gigantic octopus sitting on the roof of her apartment building. That is what happens in author Lucy Branam’s new picture book, Roof Octopus.

In the book, young Nora suddenly spies a humongous octopus on the roof of her apartment building. She alerts her parents, but they — like most older people — don’t have enough imagination to see it at first. After they focus, they see it just fine, and marvel over what it’s doing there and how to get it to leave. They try ignoring it, but not only does the octopus stay, it begins to engage in random acts of kindness; it walks a neighbor’s dogs, washes a neighbor’s car, and even makes one of its tentacles into a swing for Nora and her friends.

These random acts of kindness seem to bring the kind but otherwise disconnected neighborhood to life. Everything goes well…until Nora invites it to come to school for show and tell. Only then does the octopus decide that it’s time to leave.

This is a cute little book about a little girl with a BIG imagination. In fact, author Lucy Branam’s prose is written in such a way that readers are never quite sure whether the octopus exists or not. Nora’s parents and neighbors might actually see the octopus, or it could be that Nora humongous creation fires their imaginations to the point that they buy into the game of an octopus on an apartment roof.

Artist Rogerio Coelho’s sketches are full of color and motion. There is the smiling octopus perched on the apartment rooftop with its long, colorful tentacles seeming to unfurl across the pages, and scenes of controlled chaos in the kitchen and the busy bustle of life within the neighborhood.

Use this book to inspire an open-ended discussion about the far-reaching, infectious nature of a child’s imagination.