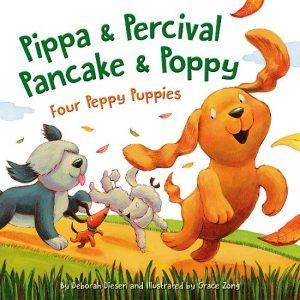 In the book, four peppy puppies are looking for adventure. A Heinz-57-ish puppy named Poppy goes out for a run and stumbles upon a St. Bernard-ish puppy named Pancake. The two of them prance and parade along until they encounter a Daschund-ish puppy named Percival. It doesn’t take long before the three fast friends encounter an adorable Poodle-ish named Pippa, and now the quartet is complete.

Off they scamper for a four-sided adventure which ends with them finding yet another creature…but this time it’s a cat who IS NOT in a good mood. The four puppies have no desire for cat-scratches, so they high-tail it out of there. Before long, their noses pick up the familiar scent of…their people! Then off scampers each puppy, straight into the arms of the humans who love them.

This little book really is adorable. It’s like a counting book, an adventure book, and a “there’s no place like home” book all rolled into one. Ms. Diesen uses lively rhyme to tell the four puppies’ tail — make that tale, and the meter is strong, steady and rarely off beat.

Use this book as a beginning counting book, or as an adventure book for your budding animal lover. It can also be used to confirm the age-old saying, “there’s no place like home.”