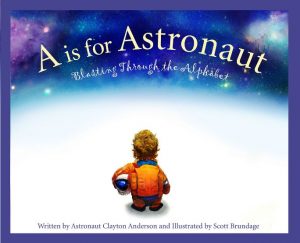 How would you like to explore the depths of outer space while you belt out a series of too-cool rhymes? This may never happen for you in real life, but reading astronaut Clayton Anderson’s newest picture book, A is For Astronaut: Blasting Through the Alphabet, comes close to it!

In the book, the super-technical technicalities of being an astronaut and exploring space are juxtaposed with simple, smile-conjuring rhymes about what it’s like to experience space. For example, the letter A explains who the first astronauts were (John Glenn, Gordon Cooper, Gus Grissom, et.al.) on the left side of the opening spread, and just what the astronauts do (pilot, fly into space, space walk) on the right side of the spread.

With each turn of the page, young readers and avid young astronaut hopefuls progress through the alphabet — and through the atmosphere to outer space and beyond, on a personal adventure filled with fiery colors, glowing stars and purplish nights.

This is an exciting book that is, surprisingly, not as fast-paced as one would think a book about space would be. Young readers (and those who help them read) should be warned that this is an extremely wordy book. The rhymes are brief enough, and quite delightful; however, the non-rhyming topics that reinforce the text include vocabulary that can be a bit of a challenge for the early elementary grades.

Artist Scott Brundage’s illustrations are, like the heavens at sunset, something to behold! There is a close-up illustration of an astonished boy wearing sunglasses that reflect an amazing shuttle liftoff; a lovely painting-like illustration of a girl and her dog gazing up at a purplish, star-studded sky; and even a depiction of 35th president John F. Kennedy inspiring a crowd as he declares, “We shoose to go to the moon!”

Use this book as exciting supplemental reading in your Science or Occupations class. It may also be used to inspire both boys AND girls to pursue an occupation in STEAM: Science, Technology, Engineering, Arts and Mathematics.