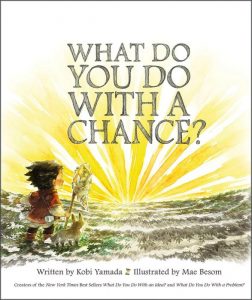 How many times have adults chosen to ignore an unexpected chance that gives them the opportunity to try something new or to explore something different that is completely outside their experience? Chances are (get the pun??), more than once. But what if an amazing chance presents itself to a very young child? What does he (or she) do with it? Does he take the plunge…or hide from it?

That’s the premise of author Kobi Yamada’s final installment to his “What Do You Do With…” trilogy, called, What Do You Do With a Chance? In the book, a young boy is minding his own business when a “chance” shows up out of nowhere. It flutters into his field of vision like a little yellow butterfly, and “acts like it knows him.” It even acts like it wants something…but what?

Of course the young boy is flabbergasted. He did not ask for this chance and he certainly doesn’t know why it’s here — and why it chose to come to him instead of anyone else. When it vies for his attention, he pulls away. At last the chance does what chances do: it flutters away — probably to seek out someone who’s willing to “take it.”

After the chance is good and gone, the young boy waits anxiously for his next chance to come around, and when it does, he quickly reaches for it. But he misses! This failure leaves him greatly embarrassed because he has put himself out there and failed. He then ignores every chance that comes along, until he realizes something: maybe he doesn’t have to be brave to take a chance; maybe he needs to “just do it.”

What Do You Do With a Chance? is yet another amazingly clever picture book by author Kobi Yamada that leads children and adults to consider the possibilities in their lives. Mr. Yamada’s prose is so realistic and on-point that it inspires readers to delve deep into self-reflection and ask themselves if they’re living life to its fullest and being the best that they can be. Also, watching the young boy ignore his chances and then wonder why they come around less and less is like re-living past chances we decided to ignore in our own lives.

Artist Mae Besom, who also illustrated Books 1 and 2 of this series, does an outstanding job of personifying the “chance” that presents itself. The illustrations are all done up in soft grays and pencil tones, and the “chance” flutters in and out of the illustrations like a playful yellow butterfly. This contrast in color perhaps suggests the way our real lives unfold: everything is gray and/ monotone — meaning everything is the same — until we do something different; take A BIG chance and try something new.

Use this book to start discussions on taking chances, getting outside one’s comfort zone, recognizing opportunities, and learning to look for something different in this “same-old, same-old” world we live in. This book is great for the classroom, but it’s also equally as important on your child’s personal bookshelf.