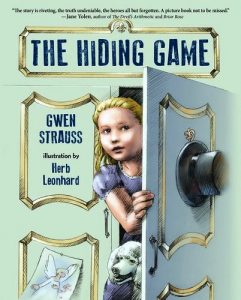 Any child whose family has been forced to move from house to house (for whatever reason) knows how discouraging and even exhausting it can be to never seem to settle down. But what if the move is not for financial or employment reasons? What if the constant moving is so that the family can stay alive? That is what happens to a girl named Aube whose refugee family tries desperately to stay hidden from the Nazi’s in author Gwen Strauss’ latest picture book, called The Hiding Game.

The book opens to the Fall of 1940, the summer after Aube’s family has moved over and over and just barely managed to stay one step ahead of the Nazi’s. They finally find sactuary in a place called the Villa Air-Bel,a place where families of “thinkers, artists and writers” gather to support each other and hide from the Nazi’s.

These intellectuals paint, make crafts and even sing. They also teach the children about survival by making a game out of everything as they wait for their turn to escape the Nazi’s. For instance, they encourage young Aubrey to find a great hiding place in case the Nazi’s ever raid their home. They show Aube how they send secret messages to other refugees by “rolling long pieces of paper into the finger of a plastic glove, and then hiding it inside the toothpaste tube.” They also sing comforting songs by the fire after they have listened to the latest news about the gruesome war.

Aube prays for the families that silently slip away to freedom in other countries, and for those who fail to make it out and end up in the concentration camps. Then one day, men in uniform show up at her door to take her father away.

The Hiding Game is a shocking, in-your-face picture book about the horrors of the Holocaust as seen through the eyes of a child. The fast-paced prose lends authenticity to the effort it must have taken to stay one step ahead of the Nazi’s — and death — in World War II Germany.
One quibble: Because there is so much going on in this story, the prose may seem overwhelming or even disjointed to young readers.

Artist Herb Leonhard’s illustrations are done up in soft, almost haunting pastels. He captures the muted joy of the artistic families as they interact with and encourage each other, the shadowy trauma of Aube being forced to hide from the Nazi’s in the kitchen pantry, and the grim realities of life when one of the book’s main characters stands blindfolded before a Nazi firing squad.

Use this book to start a discussion on the Holocaust, children of war, or America’s involvement in World War II.