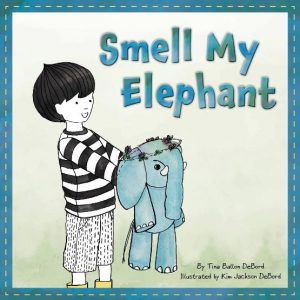 Children ask all sorts of questions, and adults would do well to prepare themselves for whatever may come their way. A prime example is author Tina Ballon DeBord’s debut picture book, Smell My Elephant, in which a young boy named Fletcher asks everyone he encounters what they think his stuffed elephant smells like.

The book opens with the concept of “sameness” in a child’s life. Young Fletcher knows what his stuffed elephant should smell like based upon the food or fruit Fletcher has eaten and the places he has played—because Elephant is always with him when he does these things. But for some reason, Elephant doesn’t smell the same. His smell isn’t bad, it’s just…different, and this sudden change in Fletcher’s orderly world throws him for a loop. Now his new mission is to identify the smell that is coming from his beloved stuffed companion.

Fletcher questions his mother, his father and even his sister. They suggest random smells, like popcorn, blossoms, and dirty socks, but none of these smells are it. Fletcher must keep sniffing—and retracing his steps—to figure out where Elephant’s new smell has come from.

This is one of those clever, “wow-I-never-thought-about-that” books that young children will find it easy to identify with. They will understand Fletcher’s need for sameness and his urge to find out what’s different, because this “sameness” is what orders their day and comforts their own minds.

Ms. DeBord’s prose is simple and full of innocence. Readers will find it difficult not to smile and say, “Awww!” as they turn the pages.

From the book’s cover art of an inquisitive little boy holding up his garland-crowned elephant so that whoever is next in line can take a good whiff, to adorable illustrations of Mom, Dad and best friend sniffing Elephant to see if they can identify the smell, artist Kim Jackson DeBord (whose last name is the same as the author’s—are they related???) does a wonderful job capturing the pure innocence of childhood. The illustrations are spare in detail and soft in color, but they still manage to conjure sweet memories of a kinder, gentler time when the biggest concern in a child’s world was—well, what his or her stuffed elephant smells like.

Use this book to open discussions about change, daily routines, or even solving mysteries.