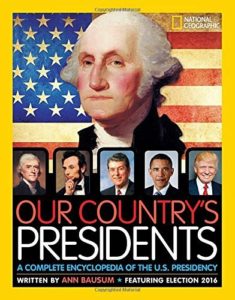 This book is full of amazing information, and perfect for your school or personal library.

The 2017 presidential inauguration is two days away, and this is the perfect time to pick up author Anna Bausum’s latest National Geographic picture book, called Our Country’s Presidents: a Complete Encyclopedia of the U.S. Presidency, to brush up on our presidential history.

Targeting patriots ages 10 and up, this book is a complete encyclopedia of the 44 presidents of the United States–with a special section on the newly-elected 45th president…Donald J. Trump. Each profile includes the president’s official portrait, facts about his early life, his original signature, his spouse and children, and every other important tidbit you can think of about his life. There are even entries on the number of states in existence when each president came into office, and selected landmarks that tie each president to certain geographic areas.

This book truly has everything for the American history buff. There is a section (and diagram) on the history of the White House–including a picture of how it was set on fire by enemy hands; an explanation of how and why political parties began to form; and entries on what each president is most remembered for.

There are wonderful pictures of President Barack Obama sprinkled throughout, showing how he went about his day working with members of his staff, members of Congress, or even young visitors who simply wanted to meet him. In addition, there is plenty of information on the country’s president-elect, Donald J. Trump. The book opens with Mr. Trump’s victory speech, and closes with a brief section on his life and his preparation to lead the country in 2017.

This thoughtfully-written book includes facts about the darker side of American history, too, like how George Washington was a slaveholder, and how Thomas Jefferson had children by his slave, Sally Hemings. There are also facts about the more curious side of the presidency, like which presidents died in office, which presidents died on the same day, the 20-year presidential curse and when it was broken, and how and why white house traditions like official portraits and Easter Egg hunts came into existence.

This is not just a book about presidents, it’s an American history book through and through. And true to National Geographic form, there are some spectacular pictures inside. There are, of course, replicas of each president’s official portrait. There are also images of women marching for voting rights, Martin Luther King, Jr. and others marching on Selma, the Indians walking the infamous trail of tears, and the western frontier when it was still only a vast grassland.

Use this wonderful book as a supplemental photographic history or social studies book. Also use it to help students understand government, laws, and how countries are envisioned, formed, and expanded.

This one gets 5 STARS!