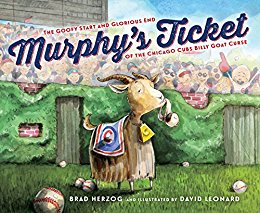 Baseball teams are known for having curses on them. The Chicago Cubs, for instance, claimed to have been under a curse that had begun in 1908 and then got worse after a man called Billy Goat got angry because his real, live billy goat (named Murphy) was refused a seat at a Chicago Cubs World Series game in 1945.

In author Brad Herzog’s newest picture book called, Murphy’s Ticket: The Goofy Start and Glorious End of the Chicago Cubs Billy Goat Curse, Billy Goat loved Murphy and didn’t take kindly to officials treating him like he was an animal (although he was!), so he decided to put a curse on the Chicago Cubs. He said, “Them Cubs ain’t gonna win no more,” and…they didn’t.

The Cubs tried to ignore the curse, but superstition overwhelmed them to the point that they began to believe that black cats and foul balls and all sorts of other weird occurrences were the handiwork of Billy Goat and his jinxy billy goat, Murphy. They tried all sorts of “reverse-the-curse” antics, like spraying holy water, blowing up foul balls and even bringing billy goats to Opening Day. None of it worked until they played ball on a day that was exactly 46 years to the day after Billy Goat passed away…

Murphy’s Ticket is a fun and funny way to introduce young readers to baseball history and curious jinxes all at the same time. The illustrations are quite comical, with prancing goats, wide-legged pitchers, and a bobble-headed Billy Goat yelling his curse at the Chicago Cubs. The prose is written in rhyme that is sometimes a bit off-beat, and the word count is a bit long for very young children. Other than these two quibbles, this book makes for a cute addition to any school library or gym teacher’s bookcase.