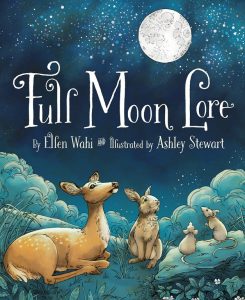 For any child or adult who has ever had questions about the full moon, author Ellen Wahi’s new picture book, Full Moon Lore, is highly recommended. The book opens with a mini-lesson about the moon; how farmers have planted crops by it and people have kept track of the seasons by each full moon for centuries.

Not only is this an educational book, it’s also like a wildlife adventure. Artist Ashley Stewart’s illustrations are just lovely, full of deep, rich colors that are comforting to the eye. There are dark skies lit by twinkling stars, and shadowy pastures full of deer, rabbits, curious rodents and even howling wolves. There are sweeping illustrations of lonely farms blanketed by fat, falling snowflakes (Snow Moon); serene bunnies in the middle of quiet fields that are adorned by pink flowers and budding trees (Pink Moon); and even illustrations of restless fish bursting out of the waters (Sturgeon Moon).

Use this book to discuss tracking time, understanding seasons, and even investigating climate as the year wears on. Great in elementary school libraries or as part of your child’s personal library.