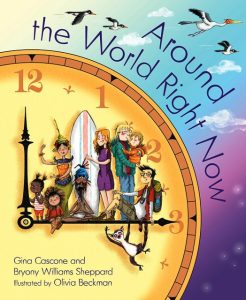 Around the World Right Now, is a newly-released picture book by authors Gina Cascone and Bryony Williams Sheppard that gives brand new meaning to the old saying, “Never a dull moment.”

The book opens with a collection of exotic clocks that all show different times, followed by the sage explanation that “there are twenty-four hours in each day, and twenty-four different time zones across the world.” Then begins the meticulous countdown of things that are happening across the world: The authors show how though it is 6am people in San Francisco and people are just waking up, it’s 7am in Santa Fe New Mexico, where a lone artist is painting still life. But it’s 8am in New Orleans, where people are sipping their morning coffee, but it’s 9am in New York, where people hurry to and fro to work.

The book moves from there to Halifax, Nova Scotia, the South Sandwich Islands, Rome Italy, Greenland, and even London, England. In fact, the story line flows all across the globe and back, and the time on the clock is different in each place. And yet, the times are all happening at once…

This is a wonderful little book that introduces geography, time zones, and the “bigness of the world out there. Each featured location introduces different races, cultures and nationalities. Readers are introduced to the jazz players of Louisiana, the whale watchers of Nova Scotia, the Inuits of Greenland, the children of Cape Town, South Africa, and even that elusive “girl from Ipanema” who goes walking on the beach.

Although straight-forward and quite matter-of-fact, the prose has a twinge of adventure that keeps readers turning pages until the very end. Artist Olivia Beckman’s illustrations are both lively and nostalgic. She does a wonderful job capturing the frantic pace of the workers in the city that never sleeps (New York), the carefree strut of the girl from Ipanema, the chilly embrace of the Inuit boy showing affection for his dogs, and the semi-muggy scene where the family from Africa are picnicking with a lemur.

Again, use this book to discuss geography, cultures, time zones, or even to discuss the supposed difficulties of relocating to a different time zone.