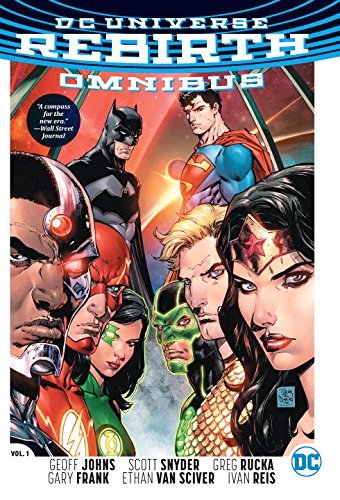 We’ve all heard of wasting time–and even trying to make up for lost time. But what is mankind to do when Time itself is absolutely, completely, inexplicably gone? That’s the premise of DC Comic’s latest oversized graphic novel, The DC Universe Rebirth Omnibus, by Geoff Johns, Tom King, Greg Rucka and Peter J. Tomasi, and the results are a dazzling array of unthinkable consequences.

The book open with poor Wally West (aka, Kid Flash; aka, The Flash) tumbling through nothingness and praying he does not disintegrate into kinetic energy and a poof of orange smoke before he figures out how to escape the “outer fringes of Time” and return to the Earth he once knew. Wally is a prisoner of what’s called a “Flashpoint”—a phenomenon that has hurled Time into the abyss and left everyone in the universe EXCEPT Wally with amnesia. If Wally ever hopes to get things back to normal, he has to find someone who remembers him.

Thus begins the tangled tale of the DC “rebirth.” And it is indeed tangled. Wally’s predicament throws the entire universe off kilter, and he is forced to approach an endless parade of characters in an attempt to find someone to be his “lightning rod” and guide him back to the here and now. While this makes for a “never a dull moment” story line, the dizzying array of characters may prove overwhelming to those who are new to the DC universe.

For example, there’s The Atom, who has just discovered a disruption “deep within the temporal nanostructure of the time line,” and who has just shrunk himself beyond the atomic and can only return with the help of his assistant—but he completely disappears before he can tell his assistant what to do to get him back. Then there’s Clark Kent, who is living in an alternate universe and remembers being killed on earth, but who is now trying to make sense out of his life in his “other world.” The story lines go on and on, and each one is more exciting than the next. In fact, it’s probably safe to say that the DC Rebirth series offers enough variables to keep Hollywood movie makers busy making blockbuster films for years to come.

This is an outstanding book for both avid DC Comics fans and newbies to the genre. It’s oversized, which means there is no squinting or eye-crinkling to see the exquisite details in the illustrations, or read the text bubbles. The paper is some of the thickest out there, so the book should be able to withstand relentless browsing, flipping and backtracking. The illustrations are by some of the best in the business, and are rich in both intricate detail and heart-warming color. In addition, the story line has a mouth-watering number of twists, and the story line is enough to keep children, teens and even adults entertained. There are cool teens like the Blue Beetle Scarab, whose body is host to alien scarabs; there are same-sex superheroes; there are powerful people-of-color and there are even nerds who make you want to jump up and cheer for them.

Use this book in school settings, for supplemental reading, or to inspire reluctant readers to fall in love with books for the very first time.