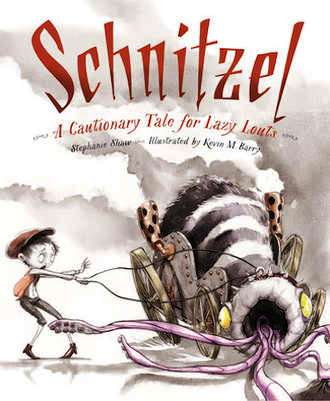 We have all been guilty of trying to get out of work at one time or another, and we have probably all learned our lesson from it. But what if you learn your lesson from an impish vampire with mischief on his mind? That is the premise of author Stephanie Shaw’s latest paranormal-ish picture book, called Schnitzel: A Cautionary Tale for Lazy Louts.

In this variation of the classic poem, “The Sorcerer’s Apprentice,” a young lazy-bones named Schnitzel is apprentice to Willibald the wizard, who instructs him to vacuum every room, not miss a single corner, and forget about casting spells. But Schnitzel, who admits to being “quite a lazy lout,” will do anything to get out of having to clean with Willibald’s “temperamental vacuum,” which looks suspiciously like a giant bumble-bee with a cavernous mouth.

When the doorbell chimes at midnight, Schnitzel is happy to allow a vampire-ish salesman inside, especially when he offers to “do all your work…and I’ll not charge a dime.” But when the salesman unveils “The Thing,” a vacuum-like contraption that shoots flames as it gobbles up everything in sight, chaos ensues. Schnitzel watches helplessly as the thing consumes tables, dishes, garbage–and finally the entire house, only belching out an “I beg your pardon” after everything has completely vanished. Suddenly Schnitzel wishes he had done his work himself, and it is only then that he can finally see the proverbial light at the end of the tunnel.

Schnitzel is a creative little book about laziness, responsibility, and why it’s best for a young person to do what they’re told the first time. Ms. Shaw tells Schnitzel’s story in a delightfully impressive rhyme, and Kevin M. Barry’s illustrations give the book a Tim Burton-ish feel. There are dark, brooding rooms, winding staircases, smoke-filled backgrounds, and wide-eyed, pointy-eared, characters that are perfect for the upcoming Halloween holiday.

Use this book for independent reading or for holiday fun.