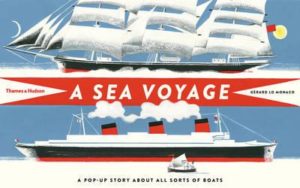 Most people love the majesty of the high seas, but very few know what the sea is like on its angry or boisterous days. That’s where a clever little pop-up book called A Sea Voyage, by Gerard Lo Monaco, comes in.

From the moment the reader opens the first page and witnesses the wild tilt of a struggling pilot boat as it bobs on the troubled sea, he (or she) cannot help but imagine what it must be like to be one of those brave sailors manning the boat, who no doubt dream of being on land again. 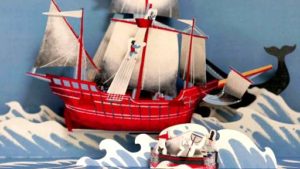 The book tells various stories, all in rhyme, about different types of boats that set sail on the open sea. In one frantic popup scene, a dog has fallen overboard and someone yells, “Call a lifeboat on the double.” In another popup, the book describes what it’s like to witness a big black whale exploding out of the water and greeting the occupants of a caravel (a large sailing ship used for sailing and exploration). There are other scenes and other ships, like an ocean liner cruising by, and also a lightship that guides a smaller ship that’s in trouble to land.

This is a cleverly constructed book. The 3-dimensional pop-ups depicting courageous boats that take on the monstrous sea are absolutely breathtaking, and come complete with little men at the helm, safety lines whirling and twirling in the wind and the sea, and dark, ominous skies that warn sailors and their passengers of more storms to come.

Mr. Lo Monaco’s prose is delivered in precise, cheerful rhyme–a perfect juxtaposition against the gray skies and stormy seas in the popups. This prose is accompanied by brief descriptions of various types of boats, which serves as a great educational tool.

Use this book to fire imaginations, inspire art, or discuss travel and occupations.