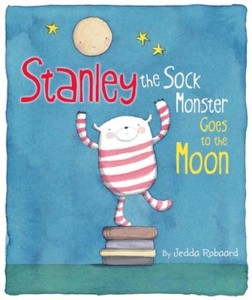 Stanley is a soft, cuddly little sock monster who loves the moon like nobody’s business. Every night his father reads Stanley’s favorite “moon” book, and as he reads, Stanley’s imagination goes wild. When his father tells him he can be and do anything he sets his mind to, Stanley has all the fuel he needs to get to the moon: his imagination!

Stanley thinks. And plans. And gathers all his “moon” notes, including a moon-made-out-of-cheese pin-up, pictures of a rocket ship, a moon boot, and a sketch of the moon smiling serenely down upon the earth. With these in hand, Stanley tries several experiments to launch himself into orbit, but it’s all a bust. Still, he never stops believing he can somehow get to the moon.

In the briefest of sweet prose, Ms. Robaard manages to meld a young one’s grande imagination with the reality of the eventual success that comes from never giving up. True, a story about actually going to the moon may be a bit far-fetched, but a story about “reaching for the stars” is not. This book encourages children to focus on their biggest dreams, to believe they can do anything they put their minds to, and to press forward to figure out how to achieve what they want. It even gives an ever-so-subtle reminder to share with others when they achieve their goals.

Ms. Robaard’s prose feels safe, encouraging, and spot-on for its pre-kindergarten to grade 2 audience, and her bright and colorful illustrations are adorable enough to fire even the most dormant imagination.

One note: The appearance of the space boot with no explanation of where it came from or if it is only a figment of Stanley’s imagination may be a bit confusing.

Aside from this, this delightful little book will leave young children and the people who read to them cheering for Stanley, laughing at his attempts, and waiting impatiently for his next adventure to begin.