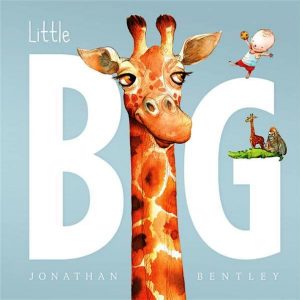 Do you remember when you were little and the world was very big? And how you dreamed of all the wonderful things you could do if your body would only grow some more? That’s what happens in author/illustrator Jonathan Bentley’s adorable new picture book called Little Big.

In the book, a nameless little round-headed toddler thinks of all the things he could do if he just wasn’t so darned little. If he was only big, he could wear his brother’s backpack, walk in his shoes, and climb into his BIG chair and eat some of the cookies on the counter. But since he isn’t, the backpack is too heavy, the hat falls off and the BIG chair topples over.

That’s when the toddler realizes how dissatisfied he is with his “little legs, little hands, little mouth.” So he fantasizes that the cute and oh-so-cuddly stuffed animals in his tiny little backpack are humongous creatures that can help him be big. The giraffe can help him beat his brother in a race up the hill, the gorilla can lift him high above the trees—and also easily open the cookie jar for him, and the alligator can help him bully his big brother into going to bed early.

But then the toddler realizes something: if he’s big, he can’t ride in his little wagon or play in his little playhouse. And if his brother goes to bed early, he will have no one to tell him funny stories after dinner.

Little Big is just a delight. Mr. Bentley captures a child’s voice and imagination in this sparsely-worded book. Plus, young children ages 3-5 will immediately see themselves in the round-headed little toddler. They will identify with his frustrations, celebrate his fantasies, and sympathize with his longing to stay little and play with his toys for just a while longer.

By the way, this isn’t just a book for children. Parents will love it, too. They will smile at the toddler’s moods and chuckle at his vivid imagination. And they will root for him from the moment he takes a wobbly walk in his brother’s big shoes to the time his imagination gets the best of him and he hides in a small, secret place with his arms around his pillow.

From the striking cover of a humongous giraffe eyeing the rambunctious little toddler to the eye-popping watercolor of the mountain-sized gorilla dwarfing the little fellow, readers of all ages will fall in love with this book.