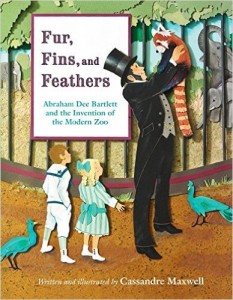 Everyone loves the zoo, mainly because it is often the first place we learn about different animal species, what they eat, how they behave, and where they come from. But how many people know where zoos come from? Not many, at least not until the debut of author/illustrator Cassandre Maxwell’s beautiful new picture book: Fur, Fins, and Feathers: Abraham Dee Bartlett and the Invention of the Modern Zoo.

In the book, readers young and old learn that an obscure child named Abraham Dee Bartlett came into the world loving animals and wishing the best for them. Because his father had a friend who collected zebras, tigers and giraffes, and other animals, Abraham often got to play with them and experience their cuddly side. They yowled or yipped or purred as he played with them, and this is how he became an animal-whisperer, of sorts.

But it was after he returned them to their stark cages that he began to form the resolve to do better by the animals. He didn’t like that they lived in empty cages and had hardly enough food to eat. He also didn’t like how their keepers teased them and often left them agitated. Unfortunately, though there were books about animals, there were no books or experts on the subject of animal-keeping at the time. So, the animals—and Abraham—simply had to suffer through the neglect.

Abraham eventually got a job at the Museum of Natural History, where he learned all about animal anatomy. He caught the eye of the London Zoological Society, who eventually appointed him to be the next superintendent of the London zoo. From there, Abraham dedicated himself to the proper health, care, and feeding of the animals. When he was forced to saw off the horn of a sick rhinoceros, he posted a sign to explain what had happened, and…voila! Exhibit labels—which were previously unheard of–became the norm at the zoo. Now people could read about all about animals and be educated while they were entertained.

Fur, Fins, and Feathers has something for everybody. Ms. Maxwell manages to produce colorful illustrations that are both detailed and simplistic. Her prose is brief and to the point, but smacks with the excitement that young children feel as they are learning something new. Plus, the subject matter—animal care and psychology—will pull on the heartstrings of every true animal-lover who wishes only happiness for their furry or feathery friend.

This book should be well-received wherever it lands, be it science class, history class, art class or the local zoo.