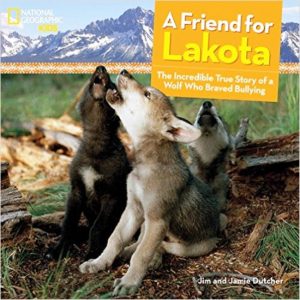 Canine lovers adore books with cuddly cubs or puppies frolicking in the grass, and the new National Geographic Kids picture book by Jim and Jamie Dutcher has all this and more. It is called A Friend for Lakota: The Incredible True Story of a Wolf Who Braved Bullying, and it gives picture book lovers an inside look at some of the cutest creatures in nature–and the lessons we can learn from them.

The book opens with two wolf cubs that are on their own and full of adventure as they explore Sawtooth Mountain. Shy and agreeable Lakota and his daring brother Kamots frolic and play in the lush grass and otherwise behave as two typical siblings. There is nothing untoward about their friendship; they are simply two brothers with a common history and a hankering to explore the world together.

But as they grow older, new wolves their age join their group and things begin to change. Kamots emerges as a great potential leader and the other wolves accept him, but Lakota is not so fortunate. Although he is his same playful and compliant self, members of the pack begin to pick on him. They snarl in his face, pull his fur and even nip at his tail. And the more Lakota tries to show them that he only wants to be their friend, the worse they treat him.

Things would probably keep going this way if one member of the group called Matsi hadn’t decided to put a stop to the bullying. When the other wolves gang Lakota, Matsi fights them off. And because they respect Matsi, they don’t bother Lakota–at least not while Matsi’s watching. Now Lakota can finally live his life without fear of being bullied. But most important of all, since he remembers what being bullied is like, this influences the way he deals with new cubs that are born into the pack.

Although this is a book about studying and understanding wolf behavior, elementary schools would do well to adopt it (it’s written for ages 4-8) to use as a springboard for discussions about human bullying. For example, teachers, librarians or even parents might discuss how even though most children begin their social life on equal footing, some are targeted for bullying for no visible reason.

There could be a discussion on “mob mentality” and how, according to the free dictionary, people are influenced by their peers to adopt certain behaviors. There might also be a discussion on how one person (or in the case of this story, one wolf) can make all the difference in the world, because once someone says no, others will realize that what they’re doing is just plain wrong.

Jim and Jamie Dutcher use language that is clear and matter-of-fact, though some of it may be a bit advance for the average 4 or 5 year old. The photographs are lovely, and are full of all the cuddly goodness of baby wolves and lush greenery of the open wild.

This book is highly recommended for early elementary classrooms.