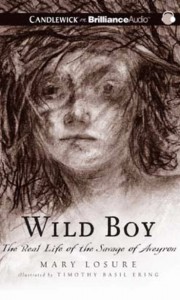 Wild Boy: The Real Life of the Savage of Areyron by Mary Losure is the story of a ten-year-old orphan boy living naked, wild, and alone in the woods until he is finally captured by hunters.

Instead of socializing him, the hunters tie him in the village square so boisterous onlookers can satisfy their curiosity about him. He escapes, and with a new and quite understandable distaste for humans, disappears into the forest to survive another harsh winter on his own.

After he is spotted and captured the following spring, the boy is sent to live with a widow woman who doesn’t quite tame him but who does manage to improve his eating habits by introducing him to the joys of roasting his food rather than eating it raw.

When French officials learn of his capture, they become keenly interested in educating him and vow to teach young Victor (the name they give him) to speak so they can unlock the secrets of his savage mind.

Unfortunately, no matter how hard they try Victor never learns to speak and ends up being resented by his scholars, who fear their reputations will be sullied by this failure. Soon the very men who had such great hopes for Victor stop interacting with him—and even forget to feed him.

Just when things seem their worst, Victor meets Dr. Itard, another scholar who patiently devises several educational experiments that prove Victor is capable of learning. But as time passes and Victor still does not learn to speak, the determined Dr. Itard gives up, and Victor’s future is more uncertain than ever.

Although Wild Boy is quite dismal at times, it is still thoughtful reading. Author Mary Losure breathes a wistful sort of life into this stark and tragic story, and her “bare-bones” writing style gives readers a unique, in-your-face view of the world from Victor’s mute, helpless, and socially-deprived perspective.

The result is a storyline that tugs on every maternal, paternal, and/or protective instinct one human might ever feel for another.

Artist Timothy Basil Ering sprinkles the pages with shadowed pencil drawings that are surprisingly fitting for this book’s tone. There are dark sketches of Victor crouching in the woods with his hair blowing wildly in the wind, Victor being manhandled as he is marched naked through the village square, and Victor gazing with something close to awe at one of his instructors.

History buffs will love the extensive bibliography as well as the detailed author’s notes that include a reference to the possibility that Victor may have suffered from a severe degree of autism.

Wild Boy may fare well as supplemental reading for the middle grades and young adult ages, and might even prove useful in special education and/or psychology classes in higher learning settings. 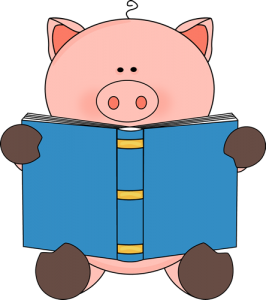