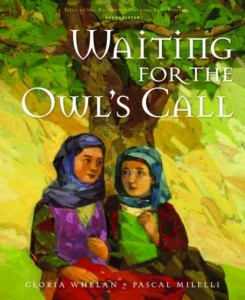 I’m back with another picture book for your enjoyment. This one is called Waiting for the Owl’s Call, and it’s one of the titles in the Tales of the World series.

The author, Gloria Whelan, has written other books as well as poetry for children and young adults. However, it should be noted that this little book is very poignant for the reader, as there is no joy from the narrator as she tells the story.

Zulviya is an eight year old girl. Her sister Aqbika is ten years old, and her cousin Aghabil is sixteen,and in Zulviya’s own words, they “belong to the loom.”

Zulviya’s mother and grandmother, and their grandmothers before them all belonged to the loom and spent their entire lives weaving and dying the wool used for making the expensive rugs they weave. They are Turkomans who live in their native country of Afghanistan.

Despite the lack of joy in her work and her life, Zulviya manages to weave a pattern in her mind of the beautiful scenes in Afghanistan: the blue lakes, the green hills, and the orange of the setting sun. Day after day, Zulviya does this in her imagination while weaving thousands of knots with her little fingers, and she continues to weave even after her fingers have become tender from the wool.

Zulviya, her sister and her cousin know there is a school that is only two days’ walk from their village, but they have never attended. Their days are the same each day as they use most everything in their space to weave rugs: First, they dig the madder plant to make a rosy dye for the carpets they weave. They use the rind from the walnut to make brown dye. Then sheep are sheared, and the wool is scrubbed and scrubbed until it is white. It is then carded to take out the burrs, then spun and dyed before it is ready for the loom.

Zulviya must spend her time each day sitting at the loom with her cousin and her sister on either side of her so they can be sure her work is done correctly. Even though she is only eight years old, Zulviya has a backache like her mother and grandmother. And she knows that, just like them, her back will one day wilt and bend.

Her day is long, and it only ends when she and the others hear the owl call. And everyday, the shadow of the loom hovers over Zulviya and her family like a ghost.

Waiting for the Owl’s Call is a very serious picture book with a serious subject. I was very surprised to learn about these children who spend their lives working on the loom.

Thankfully, the author reminds the reader that there are organizations working to prevent the exploitation of children like Zulviya and her relatives, and this is a relief.

Parents who buy this book for their children would do well to read it with them so that they can explain about other countries and their cultural habits. This will allow young children to see from an early age what happens in other countries and how their lives differ from the lives of others.

Until the next review, happy reading and happy 2014!