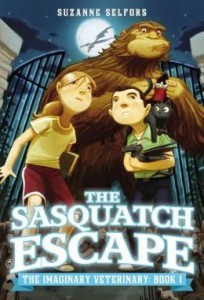 The Sasquatch Escape: The Imaginary Veterinary Book by Suzanne Selfors is a great book, and one of the funniest I’ve read in a long time. Your middle grade child will love it!

In the book, ten-year-old Ben Silverstein leaves Los Angeles with his hamster to spend the summer with his grandfather in Buttonville. The problem is, Buttonville is a veritable ghost town with empty shops and closed signs in the windows because its biggest money-maker, the Button Factory, has closed down.

Ben fully expects to have a bad and boring summer. Grandpa Abe’s house is stuffed full of faded pictures and tattered furniture, and he and Ben’s evenings are spent sitting on the porch, counting the stars and talking about Grandpa’s favorite subject, the special “pudding day” at the Senior Center on Saturdays.

Things aren’t looking so great, until Ben spots a bird as large as a helicopter flying behind a cloud. Unfortunately, Ben is known for telling “stories,” and when he tells grandpa what he sees, Grandpa doesn’t take him seriously. But Ben soon meets someone who does. Pearl Petal, a girl from Buttonville, sees the giant bird with her own eyes and quickly becomes Ben’s friend, partner and confidante in the greatest adventure he has ever had.

Ben and Pearl meet all sorts of people, like the strange-looking Mr. Tabby, who works for the mysterious Dr. Woo at an odd place called the Worm Hospital. When Ben and Pearl rescue a tiny fire-breathing creature with a broken wing and take it to Worm Hospital to see Dr. Woo, they make a mistake and leave the door open and catch sight of another odd creature: a Sasquatch!

That’s when they begin to understand that Worm Hospital is actually a place that heals imaginary creatures!

Amazing fantasy creatures, big adventures and a town called Buttonville that’s slower than molasses all mix together to stimulate any reader’s imagination. This book has something for everyone, especially young children who are just learning to love independent reading.

Don’t want to miss this wonderful adventure with all its twists and turns and imaginary creatures. It is an adorable story that is set to become a favorite on-going series.