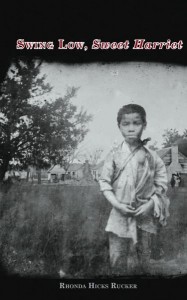 There are many heroes from American history, and even though young Ben from the Lowndes plantation is purely fiction, he is a hero just the same.

In author Rhonda Hicks Rucker’s latest middle grade novel, Swing Low, Sweet Harriet, a young slave named Ben has a big responsibility. He stumbles upon rebel soldiers hiding big smooth things called torpedoes in the Combahee River. He wants to tell what he has seen and heard, but since he never had permission to wander so far from his plantation in the first place, there’s no one he can safely tell.

His secret might have been lost forever if not for the mysterious woman (whose name is rumored to be “Moses”) who shows up on the Lowndes plantation. She claims to work for the Union Army and she asks lots of questions, like whether anyone has seen any rebel soldiers. Ben wants to tell, but he hesitates because he has been told that white people can’t be trusted…even whites from the Union Army.

When Ben’s owner and a rebel colonel discuss the fact that they know about Moses, Ben decides to find her and tell her all he knows before it’s too late. But finding her means leaving the plantation, an act that has already earned him a bloody lash once before.

Swing Low, Sweet Harriet is a poignant read about slavery, the Civil War, and striking a blow for one’s liberty. Ms. Rucker’s prose is wistful yet markedly hopeful, and her characters’ voices and actions ring true to their ages and the times in which they live.

Ben’s bravery, his dogged determination to investigate his surroundings, and his deep love for a mother he hasn’t seen in years all make for a well-rounded, well-liked character that anyone would root for.

The description of the slaves being rescued from the plantation is quite unforgettable. I won’t spoil it for you, but be ready for chickens squawking, pigs squealing, and a sea of ex-slaves running willy-nilly toward the Union boats that have come to take them to freedom.

This is an excellent resource for both independent reading and supplemental reading in American History or Citizenship. It can also serve as a conversation-starter for discussions on slavery, the 13th Amendment, and lifestyles then and now.