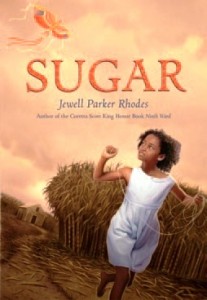 Sugar, by Jewell Parker Rhodes, is a middle-grade novel that definitely lives up to its sweet name. It is the story of sharecroppers who eke out a harsh living on a sugar cane plantation in post-Civil War Mississippi.

When the book opens the war has ended and most of the slaves have gone north with their children in search of better opportunities. But not Sugar; her mother believes that her father, who was sold away long ago, will return for them now that freedom has come.

Sugar’s days consist of working the cane fields with her mother and going off on solitary adventures whenever time permits – which isn’t often. But after her mother dies from a mysterious illness, Sugar’s life becomes even bleaker. She lives alone, surrenders her little garden plot to an ex-slave who insists she doesn’t need it, and spends her days wondering why she can’t play and have the kind of adventures she dreams of.

Her only comfort comes from the love of the Beales, an elderly couple whose own children were sold away in slavery long ago, and her friendship with Billy Wills, the plantation owner’s rambunctious son. Billy has as much of a soft spot for Sugar as she has for him, but friendships like this are considered taboo in the post-Civil War south so Sugar is forced to stay away from him.

But then Billy contracts “brain fever” and Sugar’s presence is the only thing that coaxes him back from the brink of death. At that pivotal moment the wheels of change screech into motion and the segregated south is never the same.

Sugar is a triumphant book. It is not only the story of black life on a sugar plantation during reconstruction, it is also the story of a people’s hope, a child’s bold dreams, and a nation’s struggle to accept its new reality. The book even pays homage to the humble Coolie workers, Chinese men whose post-Civil War contributions have been all but forgotten in the passage of time.

Ms. Rhode’s prose is simple and profound. Her pace never dawdles, but rather moves readers along at a brisk, never-a-dull-moment pace. Also, Sugar’s voice is so authentic, readers feel, see and hope everything Sugar experiences as she squares off against the mindset that has dared to brand her a second-class citizen.