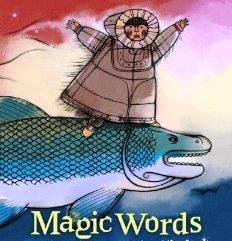 Old legends are often encased in magic and mystery, and Magic Words from the Ancient Oral Tradition of the Inuit, by Edward Field (translator) and Mike Blanc (illustrator) is no exception.

The book tells of an early time in history when magical things happened; when people could become animals if they wished, and animals could become people. When humans could speak and that word came alive and did whatever the speaker had said.

It was a beautiful time, but perhaps the most beautiful part was that no one could explain the magic, and no one tried. They just embraced it and went on with their lives.

Though simple and super brief, the prose in this lovely book is powerful enough to inspire even the busiest person on earth to stop and smell the roses…and imagine what a world of magic would be like.

Penned by an unknown author and recorded by Danish explorer Knud Rasmussen in the 1920’s, Magic Words was translated by author Edward Fields in 1965, and the words cast a sweet spell over poetry-lovers and history-lovers alike.

Today, artist Mike Blanc brings his own special touch to this mysterious legend, with his soft and soothing sketches of people and animals flying and communicating and shifting shapes until the picture book lover hardly knows where the animals end and the beasts begin.

Although the text is much too brief to offer an in-depth look into the mind of the Inuit, this book can serve as a soft and soothing bedtime story or as a feast for the eyes of the budding picture book lover on Mama’s lap.