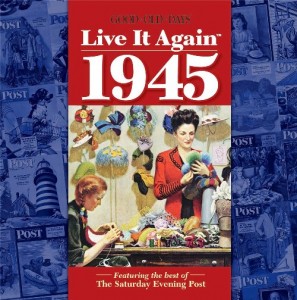 There are some books that transcend the genre line, and the Live It Again series of books by DRG (House of White Birches) do just that. They are history books, scrap books, nostalgia books and family entertainment, all rolled into one!

In Live it Again 1945, avid picture book lovers are whisked back to that historic year when old FDR (Franklin Delano Roosevelt) was sworn in as president of the United States for an unprecedented fourth term — only to die of a massive stroke a few months later.

It was the year World War II came to an end, when soldiers returned home to a very different America and struggled to readjust to home life.

In 1945, car production — which had been stalled until the conclusion of the war — sprang into life, and manufacturers began promising Americans that they would provide sleek and beautiful cars that were as rugged and durable as their predecessors, the military cars.

Movies like Mildred Pierce, Saratoga Trunk and The Bells of St Mary lured Americans into theatres, and it was also the year that 1.6 million love-struck couples got hitched.

It even produced three unforgettable photographic icons: The menacing mushroom cloud that bloomed on the horizon when the atomic bomb was dropped on Nagasaki; the photo of four tireless marines lifting the American flag atop a lonely hill in Iwo Jima; and the photo of a jubilant sailor kissing an unknown female right in the middle of Times Square.

Live it Again 1945 also includes other gems, like the cartoons of that time, an array of Saturday Evening Post covers produced that year, and a list of facts and figures from 1945, including the average cost for food, gas and family homes.

This book, like its siblings in the Live it Again Series, is a feast for the historian and picture book lover. Be sure to pick up a copy of your own!