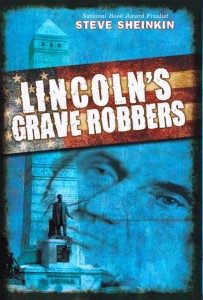 Some books have it all. Lincoln’s Grave Robbers, by author Steve Sheinkin, has just that: Counterfeiters, liars, shady characters, even body-snatchers – all combined to offer a veritable feast for true crime lovers everywhere.

This amazing tale of the men who plotted to steal Lincoln’s body opens in the year 1875 with the arrest of master counterfeiter Benjamin Boyd, whose superior engraving skills are unmatched in the counterfeiting community.

With Boyd’s arrest, the counterfeiting community begins to implode. No one else has his skills. This means the money no longer looks authentic, which means that it is now much easier for and bankers and merchants to spot the bogus bills.

Instead of shutting down their operation and walking the straight-and-narrow, the counterfeiters begin to plot how they can bust Boyd out of jail and get back to the business of printing fake money.

They don’t have to think for long. When President Abraham Lincoln is brutally assassinated, the men devise a spectacular plan to break into his tomb, stuff his body into a sack, and hold it for ransom for $200,000 and Boyd’s release.

Thus begins an intricate tale of devious underworld plots, aggravatingly-arrogant officials who ignore the plot because they don’t believe anyone would dare try such a thing, and lone lawmen who stand between the would-be-kidnappers and disaster.

Author Steve Sheinkin writes with art, wit and master precision as he spins this exciting tale that fires the senses and almost fools the reader into believing he’s actually sitting in a theatre watching a well-scripted movie.

The book, which targets independent readers ages 10 and up, is so fast-paced and meticulous, adults should also find it a magnificent and quite unforgettable read.

It should fare well in a social studies, history or English literature class. It should also do well on a summer reading list, or as a librarian’s pick for great nonfiction reading.

To purchase your copy, click on the Amazon icon above.