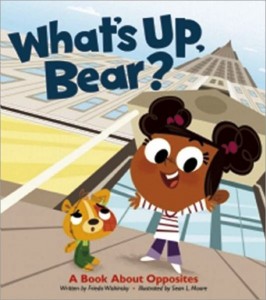 “Walk a mile in Sophie’s shoes…and learn about opposites while you’re at it.”

In What’s Up Bear?, bubbly, outgoing little Sophie is excited about her upcoming trip to the big city, but her slightly-distraught, long-faced little introverted teddy bear–Bear–would rather stay at home.

How’s that for opposites?

Since humans call the shots and not teddy bears, it’s off to the city they go. Thus begins an adventure that’s all about overcoming fears and making the most out of life–or sightseeing, as it’s called in layman’s terms.

For every question or statement Sophie poses, Bear counters with an opposite. Sophie thinks the city looks big and beautiful; Bear thinks it looks big and scary. Sophie loves a fast cab; Bear likes a slow cab. Sophie likes dancing over the bridge; Bear likes hiding under Sophie’s sweater.

Written by Frieda Wishinsky, What’s Up Bear? is an extremely clever way to teach toddlers and pre-k’s all about opposites. Wishinsky not only uses each opposite in a sentence, she also allows outgoing Sophie to demonstrate each opposite in a daily life activity.

Illustrator Sean L. Moore picks up where Wishinsky leaves off and helps children feel the impact of each opposite by emphasizing their meanings through facial expressions. There is Sophie’s exhilarated expression as the New York cabbie speeds along, as opposed to Bear’s look of slight motion sickness as he bounces along. There is also Sophie’s wondrous look at a tall building in the city, then her stunned silence because the building makes her look so very short.

This is a wonderful “starter” book for early readers. It can be used to open discussions about opposites, fears, extroverted/introverted personalities, and even traveling to new places.

This one gets five stars across the board, and the Picture Book Depot Outstanding Illustrations Award.