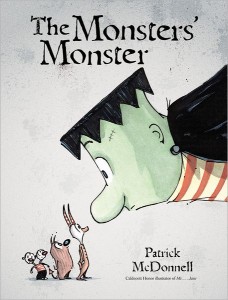 I always thought monsters were big, hulking creatures that scared the living daylights out of you, but Grouch, Grump and two-headed Doom and Gloom do no such thing. They are the teeny, tiny monsters in Patrick McDonnell’s new picture book, The Monsters’ Monster, and they do nothing all day except argue about who is the scariest.

The Monster’s Monster is a clever little picture book with a very unique twist. The plot makes sense (at least to a monster), the pace is just perfect for the ER-Pre-K and K-3 age groups it targets, and the text is full of humor from beginning to end.

McDonnell’s illustrations are bright, colorful, and made of all the stuff little monsters long for. From the attention-grabbing cover to the final sketch where all the monsters gather to…to…well, I won’t tell you that part, either. But I’ll just tell you this; the pictures are fantastic, and it’s no wonder McDonnell is a previous Caldecott Honor Illustrator.

This book promises a monstrous good time for elementary schools, public libraries, and cozy places near the family fireplace just before bedtime. It can be used as a story-starter for monster movies (age-appropriate, of course), creative writing, or variations on Halloween. Also, if your child is convinced that monsters do exist, you can introduce him or her to The Monsters’ Monster to wipe out the fears and bring on the smiles.

This one gets 5 Stars across the board. Read with confidence.