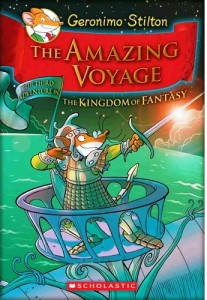 Just when you think Geronimo Stilton’s new adventure can’t possibly be as wonderful as the last one you read, you discover…you’re wrong. In The Amazing Voyage: The Kingdom of Fantasy #3, Geronimo has his best adventure yet, and neither he nor you will ever be the same at the end of it.

The book–320 pages long and chocked full of eye-popping illustrations–begins like most Geronimo books, with our hero dreaming of a calm afternoon in the ultra-quiet, ultra-tame office of his beloved Rodent’s Gazette. But that doesn’t happen, because if it did, this wouldn’t be an adventure book. Instead, poor Geronimo eats too much pizza, breaks a cup he uses to make tea for his bellyache, steps on a piece of glass, hits his head on the bathroom sink while retrieving a band-aid, and is catapulted straight to the Kingdom of Fantasy.

Although he’s treated like a king (a mouse-ly king, that is), Geronimo can’t enjoy himself because Blossom, Queen of the Fairies, has been kidnapped. To save her, Geronimo and a host of fantastical characters must make a journey to a place where nightmares rule.

Like the title suggests, Geronimo’s voyage is an amazing adventure complete with a relentless cast of characters. There’s a talking ship, a Puss in boots, an elf king disguised as a white deer, a lonely giant whose breath smells like onions, and a beautiful princess who consorts with dragons. Together, they cross oceans, climb volcanoes, fight witches who cackle like crows and even fight in mid-air as they struggle to free Blossom. It’s a wild adventure not easily forgotten…and not easily won, either.

This book may have a complex cast of characters, but I believe it’s just what the doctor—or in this case, the reading teacher—ordered for burgeoning age 7+ independent readers. The sentences are short, to the point and filled with fun, humor and colorful fonts. The book is full of plots, sub-plots, maps, character sketches, code breakers, and so many other fun elements, children won’t be able to put it down. And the illustrations are enough to make die-hard picture book lovers weep with joy. They are rich, detailed and drawn with an exquisite medieval flare.

For the adventure of a lifetime with everyone’s favorite mouse, be sure and get your copy of The Amazing Voyage: The Kingdom of Fantasy #3.