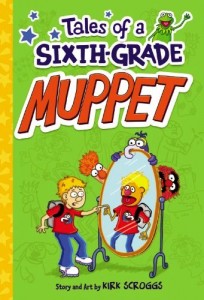 I’ve recently read Tales of a Sixth Grade Muppet by Kirk Scroggs, and it was really good! It’s based on the Muppet cartoon, and is combined with a sixth grader’s life.

In the book, a boy named Danvers Blickensderfer doesn’t have such a good life. First of all, he has the name DANVERS, which people make fun of a lot. Second, he has to share a room with his little sister Chloe. And third, he’s the only person who likes Gonzo the Great.

One day Danvers wakes up felling fuzzy. He looks into the mirror and…he’s a Muppet! He has light brownish fur with a big red nose; yep, he’s a Muppet all right. His sister was pretty excited about him being a Muppet because she could make a profit off of him.

My favorite part of the whole book is when Rizzo the Rat, who is Miss Piggy’s assistant, keeps telling her things in life that have to do with her being a pig, like, “Your email is overflowing with spam,” or “I’ll have you know I bring home the bacon in my family.” I thought this was really funny.

Danvers finally changes back from being a Muppet by waking up from…a dream! Yes, he was dreaming! But he did learn something; he learned being a Muppet wasn’t easy.

This book wasn’t too long; in fact, it was so good I wish it was longer. There weren’t any words in it that I didn’t know. It moved at a good pace and it wasn’t boring; it stayed exciting to the very end. Also, the pictures were really creative and made me laugh.

I hope you’ve enjoyed this review. See you at the next review!