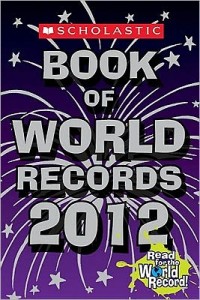 What does the movie Twilight, the State of Montana, actor Stan Lee, a Flying Fox and Charlie Sheen all have in common? Why, they’re all featured in Scholastic’s Book of World Records 2012, of course.

Scholastic Book of World Records 2012 is like having a “book of life” in your hands. That’s because it harbors info about practically every walk of life, from sports to science to nature to money, and back again. It’s small (only 9×6 in size), but like life, it’s predictable in some places, it’s full of surprises in others, and there’s never a dull moment in-between.

For example, did you know that Angus T. Jones of Two-and-a-Half Men will earn $7.8 million dollars plus a $500,000 sign-on bonus over the next two years? Lucky kid! And did you know the Peel P50 was the smallest production car ever made, weighing in at only 130 pounds, and just big enough to hold one adult passenger and one bag? I won’t tell you how much – or how little – it weighed; you’ll have to read the book to find out. By the way, it had only one door, one windshield wiper, one headlight and three wheels…but that, of course, is another story.

Did you know the Colossal Squid’s eyes are the size of dinner plates (eeeek!), the Giant Flying Fox (a bat) has a wingspan of over 6 feet, and the California condor is still on the endangered list? Truth be told, I thought that condor was already extinct. Wow, am I embarrassed!

True to their usual style, the editors of Scholastic have spared no visual or factorial expense to produce this book. Every page is chocked full of photos, graphs and facts, facts, facts. Sports fans, celebrity watchers and nature-lovers alike will feel like they’re in heaven once they have this wonderful source of information at their disposal. By the way, did you know that the Rafflesia lily can weigh up to 25 pounds? That Amazon.com gets 50 million page views per month? That American children watch about 20,000 30-second commercials every year? That…that—

Whew! I could go on all day, but since that’s not feasible, I suppose you’ll have to buy the book to find out the rest.

This book would certainly be a wonderful addition to any educational scenario. It would do well in the elementary, middle or high school classroom; the college library; the local public library, or in a private library collection at home. Writers can make good use of its diverse – albeit random – information, and of course, historians would do well to keep it close by to verify their facts. In short, wherever it lands, it’s bound to get a hearty welcome.

So if you love books about…well, everything, be sure to pick up a copy of Scholastic’s Book of World Records 2012.