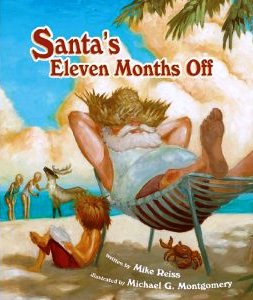 It’s a funny thing how we sometimes forget to think of others. Take Santa, for example; have you ever stopped to think that he might need – or want – a little time off to indulge himself? To do fun things, like sample sushi, join a gym, or go singing in the rain like Gene Kelly? And if you haven’t thought about it, perhaps it’s time to ask yourself why? Why wouldn’t Santa or any other work-a-holic deserve a little variety in life?

Thankfully, author Mike Reiss asks this supreme question, and uses his hilarious picture book, Santa’s Eleven Months Off, to answer just what a man of Santa’s energy (and girth) gets himself into during the months after Christmas.

In Santa’s Eleven Months Off, Santa dons his cool shades and visits Hollywood, works as a super-spy for the government, and even does a bit of sumo wrestling! He takes classes in Cookie Baking, Elf Esteem and Advanced Toy Making, goes trick-or-treating as the Easter Bunny, and even finds time to sun-bathe on the beach.

This humorously-written, imaginative book actually debuted in 2007, but it’s just as funny today as it was back then, and is a must-have for K-5 Santa-lovers everywhere. Children will adore artist Michael G. Montgomery’s eye-popping illustrations of a photogenic Santa who allows neither his occupation nor his great weight to prevent him from doing the things he wants. Montgomery makes Santa’s escapades burst to brilliant life with scenes like Santa leaping through the air with an umbrella in his hand (from Singing in the Rain), Santa squatting intently and staring down his sumo-opponent, and Santa incognito at the airport in a green suit (although the children easily recognize him).

In short, every page of this over-sized, hard back picture book is a story-starter.

For a great classroom conversation piece, a school library favorite or a funny after-Christmas read in front of the family fireplace, be sure to pick up a copy of Santa’s Eleven Months Off. This one gets 5 STARS and the Picture Book Depot Outstanding Illustrations Award.

The League of Regrettable Sidekicks

A House for Mouse