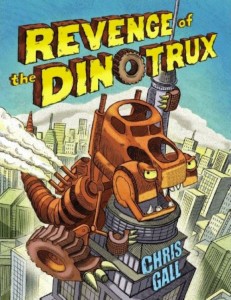 Last time, the Dinotrux ruled the earth until they became the rusty victims of a terrible storm that covered them with muddy goo and all but shut them down forever. In Revenge of the Dinotrux, our hulking truck-like fiends–uh, I mean friends–have been excavated, dusted off, and placed in a sterile museum for the viewing public.

What an insult! Dinotrux were meant to roam free, not surrender to the sticky fingers of kindergarteners on a field trip. So one night, Tyrannosaurus Trux, king of the Dinotrux, has just about had enough. He breaks right through the museum wall, and all the other Dinotrux stampede out after him.

Egad! What’s to happen to the townspeople? How can the world be safe with all our favorite Dinotrux on the loose? There’s Craneosaurus and Garbageadon, and there are a few new faces, too: Dumploducus, who collects houses; Velocitractor, who is heavy into landscaping; and even Cementosaurus, who leaves a nice cement-blob right in the middle of town square.

Just when the townspeople are at their wit’s end, the Mayor makes a proclamation; the Dinotrux must go to school to learn how to behave. Dinotrux in a school room? It can’t be…or can it? I’ll leave it to you to read the book and find out how that particular situation turns out.

Author/illustrator Chris Gall has done it again with this new installment of the clinky, clanky, cranky Dinotrux. This book is a big hard-back with rich colors, larger-than-life illustrations, and a sense of humor and adventure that leaves readers drooling for the next installment.

For a wonderful stroll through one of the most imaginative books I’ve read in a long time (or at least since the first Dinotrux book), be sure to pick up this installment: The Revenge of the Dinotrux.