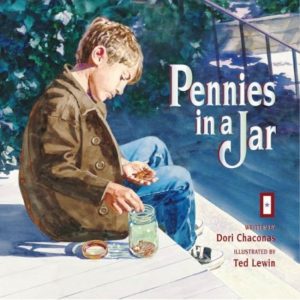 In the world of children’s nostalgia books, this one has a quiet, haunting quality that takes you back to the days of yester-year. You see, childhood is usually synonymous with joy, laughter and that wonderful feeling of being carefree. But childhood can also be a time of fears and phobias, and that is the case in author Dori Chaconas’ historical fiction book, Pennies in a Jar.

In this quiet nostalgia book, a young boy constantly counts and re-counts the pennies in his money jar as he tries to decide what to get his father for his birthday. The problem is, his thoughts are scattered because his father has just gone off to fight in World War II, and the boy is experiencing separation anxiety over the situation. He feels fear because he and his mother are suddenly on their own, fear at having to become “the man of the house,” and an even bigger fear that his father may not ever return from the war.

As he struggles to overcome his personal fears, he also deals with physical fears. Everything scares him, from the air raid sirens that ring out the black-out alerts to the big, lumbering horses that draw the trade wagons up and down the street. One of these wagons collects household garbage and the other collects rags and scrap metal for the war effort. They are necessary and the boy must deal with them, but this doesn’t make him any less afraid. It just makes him miss his father more.

And then, like every other mysterious change that happens “out-of-the-blue,” the boy suddenly conquers his fears. One minute he is cringing at the sight of a pony, and the next he is remembering his father’s words that if you want something bad enough, you must go ahead and do it. So he musters up the courage to have his picture taken as he rides the pony because he’s sure this will be the perfect birthday present for his father. It will show his father that he has conquered his fear of horses, and if he can do that, he just might conquer his fear of having to be the man of the house until his father returns.

Pennies in a Jar is a quiet, subdued picture book that proves that the traumas of war cannot at all prevent the triumph of the human spirit. Illustrator Ted Lewin uses soft, subdued colors to show readers what sadness, loneliness, and eventually joy, look like. His illustrations are authentic down to the size of each gigantic horse’s clopping hooves! The text is straightforward and honest, and moves along at a nice, steady pace, however, I do feel it may be a bit challenging for the age 5+ readers the book specifically targets.

But besides these minor details, I don’t think readers will go wrong by grabbing a copy of this book. It paints a wonderful picture of times past for young people, and a flood of nostalgic memories for the boomer generation. It can hold its own in a social students or American history class, and it will make a great story starter for writing or art classes.

For a thought-provoking stroll backward in time, don’t miss reading Pennies in a Jar.