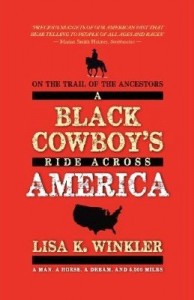 I just read an interesting story called On The Trail of The Ancestors: A Black Cowboy’s Ride Across America, by Lisa K. Winkler.

In the book, the author brings us the story of Miles Dean, a 57-year old black man who rides five thousand miles across America to follow his childhood dreams.

It seems that Miles had always wanted to be a cowboy, but since he lived in an urban city – Brooklyn, New York, to be exact – that was hard to achieve. Like every little cowboy, he played with an imaginary horse, rode it in the house and in the street, and had his own toy pistol. But not surprisingly, Miles didn’t actually see any cowboys who looked like him in movies.

Despite that fact, Miles kept his dream of one day becoming a cowboy as he grew, attended school and went about his life. The book goes on to tell of some typical disappointments in his life, like when he lost a college wrestling scholarship due to knee injuries. It also highlights how he worked many odd jobs in different areas of the country and acquired many skills, yet he continued to dream of becoming a cowboy.

Eventually, Miles became an educator and wrestling instructor. By the time he was in his thirties, he finally fulfilled his dream of learning to ride a horse. He was so excited that he later began to own horses, and longed even more to fulfill his dream of being a cowboy.

And one day, it happened; Miles decided to ride horseback across America. The ride was mapped out so that Miles would visit important historic sites and meet with historians in each state. He also met with some college professors, and visited some historic sites to gather information. He met black and white ranchers, and seemed to be treated well wherever he went. In fact, the author documented his journey and detailed the joys and problems he experienced during the ride.

Still, I must admit I was disappointed that there was not more black history connected with his ride. In my opinion, the book became more and more confusing as more emphasis was focused on Miles’ horses and the problems connected with those horses, and not what the title implies, which is that this is supposed to be a book about a black cowboy’s ride across America.

I do believe this journey was book-worthy, and Miles is to be commended for completing this grueling ride in the name of our ancestors, but I still wish more emphasis had been placed on the actual deeds of our ancestors in each location, and more information given on historic sites connected with black achievement. I also wish the author had tied up some loose ends. For instance, early in the book I assumed by some things that were written that Miles was married, but later in the book, he was a single parent. I just felt some of the details were too fuzzy to make this a smooth read.

In the meantime, here are my ratings for the book: The Book Cover caught my attention right away, so it gets a 4.

The Plot and Storyline only get a 3, because some sections seemed to be out of sequence.

This book did not mention a Target Age, so I gave this a 3.

The Illustrations were dark and not very easy to see. Still, I found them somewhat engaging, so I gave this a 3.

I thought the Layout was good, so I gave it a 4.

And last but not least, I could not give many points on the WOW factor. It got only a 3.

Well, I hope this review helps you decide whether you want to give this book a try!

Until the next review…later, Bookies!