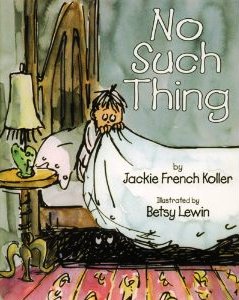 Some books are just plain fun, and No Such Thing, by Jackie French Koller, is one of them.

In No Such Thing, little Howard and his family have just moved into the most marvelous old house, and Howard loves everything about it. Until it’s time to turn off the lights and go to bed.

That’s when he hears the proverbial sound that goes “bump” in the night and cries out for his mommy. He’s sure beyond doubt there’s a monster under the bed, but level-headed mommy won’t hear of it. She has no idea that underneath Howard’s bed, Monster’s mommy is trying to calm his fears and convince him that there is no such thing as “boys,” either.

No Such Thing is an adorable book that’s just as timely and relevant for four to eight year olds today as it was when it was first written in 1997. The pace is fast, the dialogue is funny, the sentences are age-appropriate, and artist Betsy Lewin’s sketches are both sweetly nostalgic and laugh-out-loud hilarious.

This is wonderful lap book material, especially if your toddler has been noticing a few noises underneath his own bed lately. It can even be used in kindergarten and primary classes to help children learn to talk about and face their fears and concerns.

For a most clever read about a boy and a monster discovering each other’s existence, be sure to pick up a copy of No Such Thing.