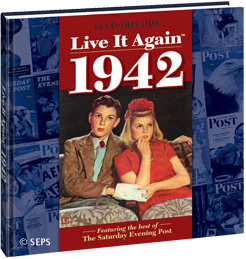 Love hanging around in “yester-year?” Live it Again 1942, published by DRG and The Good Old Days, is the book for you.

It was the year of “the empty chair,” when husbands, fathers, sons and brothers were trekking off to defend America…some never to return. It was also the year that marriage rates exploded off the charts, because couples didn’t know if they would ever see each other again.

1942 was an amazing year. Ford Motor Company stopped producing its wildly popular cars (until 1945) in order to supply jeeps, tanks and aircraft for our servicemen. It was also the year President Roosevelt instituted year-round daylight savings time, decreeing that it stay into effect until 1945. 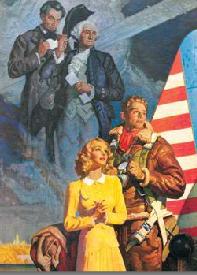 Uncle Sam posters popped up everywhere, “delicate” women showed what they were made of and took mens’ places in the factories, and Hollywood icons like Jimmy Stewart and Clark Gable enlisted to show their love of country. Bob Hope used the USO as a springboard to broadcast entertainment programs, the first New York Times crossword puzzle made its debut, and a little star named Aretha Franklin was born. 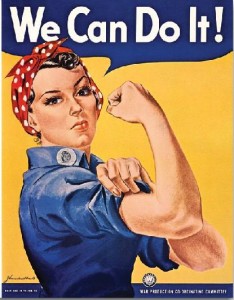 This is a wonderful book full of pictures you won’t soon forget. There are photos of prominent African Americans like Paul Robeson, speaking out for the cause; boxers Ray Robinson and Jackie Wilson enlisting in the same unit and eventually fighting side-by-side for the cause; and there’s even a photo of actress Hattie McDaniel (Mammy, from Gone With the Wind) leading a big group of entertainers to perform for the troops.

If you’re a history lover, a history writer, a history teacher, a professional or independent historian, or if you’re just a picture-book-lover who’s into old pictures, you simply can’t miss out on this third book in the Live It Again™ series.

As of press time, Amazon DOES have copies of this book, so you can order by clicking on the link to the right:

Or you can order at this direct link: http://www.liveitagain.com/

BONUS: If you want the perfect companion for your Live It Again™ Series, don’t miss DRG’s flagship nostalgia publication: Good Old Days magazine – at this link: http://www.goodolddaysmagazine.com/. I subscribe to this magazine, and I can tell you that it’s packed with wonderful old stories, recipes, early memories and poems that will take you all the way back to your childhood days.

AND IF YOU’RE REALLY INTO NOSTALGIA, don’t miss out on The Good Old Days Store, which is a catalog for purchasing nostalgic items, including books and magazines – http://www.goodolddaysstore.com/.

I hope this review helps you make your decision to go back to the good old days.