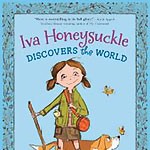 Iva Honeysuckle Discovers the World, by Candace Ransom, is a great read for ages 7-10. It’s full of adventures, has realistic sibling problems, and introduces wildly creative names for the characters, the town, and the streets. For example, the story takes place in Uncertain, Virginia – uncertain, because no one knows where the boundary line begins or ends. Then there are characters with names like Heaven and Ludwell, and there’s even an adorable dog named Sweetlips.

In the story, self-sufficient Iva thinks she doesn’t need friends, so she really struggles with relationships. She doesn’t like interacting with her sisters and she especially doesn’t get along with her “double-first-cousin” Heaven. (In case you’re wondering, her “double-first-cousin” is so-called because she and Iva’s mothers are sisters and their fathers are brothers). In fact, Iva has only one friend – Ms. Compton, the Sunday School teacher who gives her cookies and kool-aid. But if Ms. Compton shows that she has other friends besides Iva, Iva works hard to break the friendship up.

After Iva makes a failing grade for not following instructions in class, she decides to become an explorer and use Grandfather Ludwell’s map to dig for the treasure of General Braddock, reportedly buried in Uncertain, Virginia during the French and Indian War. Cousin Heaven wants to come too, but Iva doesn’t want her there and finds a way to slip past her.

However, Iva discovers that General Braddock’s treasure is probably buried under a huge mound of stinky garbage and she realizes the job is just too big for one person. She promises Heaven half of the treasure if she’ll help her dig, and Heaven, of course, agrees. I won’t tell you what they did or didn’t find – you’ll have to read the book to find out. But I will tell you that Iva couldn’t ignore Heaven’s willingness to help her dig, despite the way Iva had treated her.

I believe children ages 7-10 will love the adventures of Iva the Discoverer, but they may also discover (no pun intended) as I did, that the title can throw one off from the moral of the story. The moral of this story – and Iva’s biggest discovery – seems to be, “to make a friend, be a friend.” 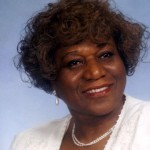 Other than this, I felt the story was a great read. The illustrations are cutesy, and I’m sure they will make Iva more real for her readers. I also feel that perhaps Iva and her on-going discoveries could turn into a series. I give this book 4 STARS.

Until the next review