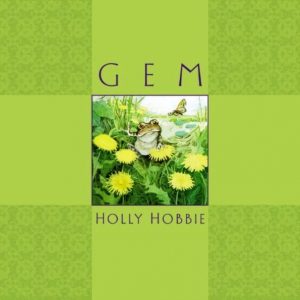 I was in for a pleasant surprise when I sat down to read Gem, by Holly Hobbie, to my grandchildren, ages five and two.

Before we “read” the book, I was a little concerned because Gem is a book of WONDERFUL ILLUSTRATIONS, but it has no words. That’s right, no words! But since my grandchildren are only beginning to become familiar with letter characters anyway, I thought it might be fun…and educational, too.

So we “read” Gem, the story of an adventurous frog, and what I discovered was that a child’s imagination can far exceed mere words on a page! My five-year old grandson “read” Gem to me while his two-year old sister listened in amazement and repeated everything he said. It was so adorable.

First, they had loads of fun pointing out the colors and various nature illustrations they were familiar with, such as the cat and bird in the pasture, the green trees and the yellow flowers. They absolutely loved following Gem as he hopped from place to place.

At one point, Gem came in very close contact with the tires of a speeding car, and I had to correct my grandson when he sadly thought poor Gem had been run over. I coaxed him to look further, and he was immediately relieved that Gem was still alive. “Yes,” he said, “but Gem has mud on him!”

After that close call, my two grandchildren were very excited to follow Gem hopping down the lane, and they even recognized the cycle of life when the older frog laid eggs, which turned into tadpoles. Of course, I was the one to use the word tadpole; they called them “baby frogs.”

My grandchildren really got into this story. They were fascinated when Gem escaped from an eagle’s clutches, and they connected with the little girl’s expression as she held Gem in her hands, remarking that she was sad when she held Gem and let him go. Not wanting them to be too sad, I did assure those sweet children that perhaps the little girl wasn’t sad; perhaps she was just thoughtful, but understood that Gem belonged in nature, where he could be free.

I really enjoyed sharing this very special book and special time with my grandchildren! I learn so much from them, including how much they know and recognize about nature at such a young age, and how much they understand before even being able to read a word on a page.

I hope this review helps you make a decision about Gem. I highly recommend it.

Until the next time,
GiGi