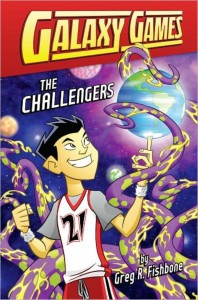 If you like books about run-of-the-mill aliens in search of intelligent – albeit, mundane – human life, you just won’t get that with this book. Galaxy Games: The Challengers, by Greg R. Fishbone, is an out-of-this-world middle grade book about three-eyed, squid-like Mrendarians who slide along their merry way on a trail of slime, blow air out of their five nose-holes when they’re exasperated, and flush the wax build-up (called “freen”) out of their gullets with a specialized “juicer” each morning.

In the book, a boy named Tyler Sato celebrates his eleventh birthday with an embarrassing Boffo the Clown performance (arranged by his annoying sister) and a star named after him, courtesy of his Japanese cousins. Oddly, TY SATO doesn’t stay put like ordinary stars, but streaks across the universe and heads straight for earth! That’s because it’s not really a star; it’s a spaceship, led by a Mrendarian named M’Frozza in search of a great athlete – earth’s finest – to stand in for her race and save them from the disgrace of losing at the galaxy games. The only problem is, Tyler’s no great athlete.

This is a clever, imaginative, laugh-out-loud book that should easily move book-loving middle grade students to the next level of independent reading. Fishbone’s unique blend of humor and detail make this a book you just can’t put down. The characters and their worlds are fully-developed and full of surprises. I especially enjoyed how the Mrendarians initially mistook the sound of human transmissions for toilets flushing; how Mrendarian air smells suspiciously like mustard; and how Fishbone fuels the imagination by using the entire universe as the setting for his book.

If you like your alien books with a twist of Mrendarian humor, you have to read this book! It would be a great group reading project for a language, English or reading classroom, and it may even do well as a supplemental text in an earth science or life science classroom. In other words, wherever you use it, you’re in for loads of fun.

Best wishes, happy galaxy games, and…may the “freen” be with you.