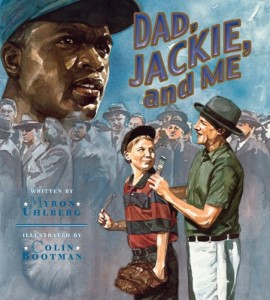 The best thing about picture books – besides the beautiful pictures inside – is their uncanny ability to capture a slice of life and freeze it in a moment in time.

That’s what happens in the beautifully-told, beautifully-illustrated picture book, Dad, Jackie and Me, by Myron Uhlberg. In this story set in 1947, Jackie Robinson has just signed on with the Brooklyn Dodgers, and loyal fans can’t wait to see him play. Two of those fans are a young boy and his deaf father, who feels an unusual connection with Jackie and tracks his progress through newspaper clippings and radio shows.

The father and son are die-hard baseball fans, and play catch almost every evening. They also attend the Dodger’s games, where the father screams, “Ah-Ghee, Ah-Ghee,” in an attempt to pronounce Jackie’s name. His father’s exuberance and inability to enunciate like hearing people is a bit embarrassing at first, but eventually the boy understands why his father feels so close to Jackie Robinson: Jackie is a minority and an outsider, and not everyone is happy to see him play. Some fans call him horrible names, and one player on an opposing team cleats his leg on purpose and makes him bleed. Through these circumstances, the boy realizes that being deaf makes his father feel like a minority and an outsider, too, and he identifies with Jackie’s mistreatment from other people who see him as being different.

Although this book is a work of fiction, parts of it are true, and it’s a lovely glimpse of a slice of life from 1947, when racial inequality was beginning to give way to acceptance and admiration. The book’s cover is beautifully rendered, with a large view of Jackie’s eager, coffee-brown face on the front, the father and son clutching their baseball tickets, and the outlines of stern and expectant baseball fans in the background. The inside of the book shows scrapbook-like clippings of Jackie Robinson at home, in the public and on the field, and the remainder of the book is filled with brilliant watercolors by illustrator Colin Bootman.

Dad, Jackie and Me offers picture book lovers a very unique experience. Yes, it has absolutely beautiful pictures, but it’s so much more than the sum of its pictures! It’s a book that examines the unbreakable bond between a father and son, the undeniable connections between the “under-dogs” of the world (i.e., African American Jackie Robinson and the main character’s deaf father), and the slow but steady transformation of nation on the verge of a mind change.

For a warm and wonderful book about history, hope and good old-fashioned baseball (and a slice of life in the process), be sure to read Dad, Jackie and Me.