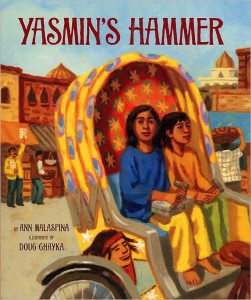 The quality of children’s picture books just keeps getting better and better, especially when publishers like Lee & Low Books encourage their authors to share other cultures and ethnicities with their readers.

That’s exactly what Yasmin’s Hammer, by Ann Maspina, does: It goes beyond the typical picture book storyline about bunny rabbits and ABC’s and brings Americans face-to-face with gripping, real-life experiences. Not that there’s anything wrong with bunnies and ABC’s; I fed my own sons a daily diet of cotton-tails bunnies and alphabet soup while they were growing up. But Yasmin’s Hammer is so much more than that. It’s written for and about children but reminds them (and us) that life as we know it is not the only reality; that there are other “worlds” out there we know nothing of that we would do well to study.

On the bustling streets of Dhaka, Bangladesh, little Yasmin spends her day working like an adult, hammering bricks from dawn til dusk and dreaming of learning to read. Struggling next to her—and hammering just as hard—is her younger sister Mita, whose unskilled hands are often injured by the hammer. Yasmin works until her muscles ache, yet she is no complainer; she just wants to learn to read so she can be what she chooses, not just a hammer-girl in a brickyard. Her family is as supportive as they can be under the circumstances, never dashing her dreams, but only saying, “Not yet.”

Of course their answer disappoints her, but Yasmin knows her family has been struggling since the day a cyclone destroyed their home and belongings, and simply can’t afford to send her to school. So this brave little soldier pushes on, keeping her dream alive by whispering one simple, comforting word to herself: “Soon.” And while she waits, she devises a plan to raise herself up by the bootstraps and change her own circumstances.

Yasmin’s Hammer is a lovely book that acknowledges suffering, but sets its focus on optimism and hope. The poignant, in-your-face storyline is touching beyond words; the voice rings true, and the illustrations (by Doug Ghayka) leave readers feeling warm, compassionate and as eternally hopeful as the story’s little heroine.

It’s no mistake that this book landed on the ALA’s Notable Children’s Books list. Whatever you do, be sure to add this book to your child’s personal library.