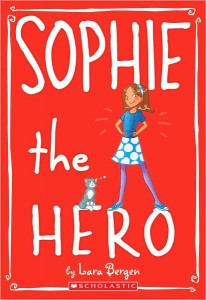 In case you didn’t know, Sophie H. Miller (H stands for Hamm—it really does!) is at it again. Sophie just got the new title of Sophie the Hero, and she’ll do anything to live up to her name.

In Sophie the Hero, Sophie is in a bit of a bind. She has told her hero story so much, no one wants to hear it anymore, and her heroic deed is beginning to fade from her classmates’ minds. Her arch enemy Mindy doesn’t make things any better either, insisting that Sophie actually rescued the run-away slinkys, not the runaway kindergartener. Meanwhile, Sophie discovers that a hero can’t live on only one heroic deed, but must keep doing things—heroic things, if she is to live up to her new title. The problem is, there aren’t many heroic things that need doing in her third grade class.

Sophie searches the school floors for things people might trip over, searches the sky for evil aliens, and even sniffs the air for smoke. But…nothing! So she finally decides that if there is no danger, she’ll have to make some. She sneaks an adventurous snake called Rumplesnakeskin out of her sister’s fifth-grade classroom and places it in her own teacher’s desk, thinking that if the teacher opens the desk drawer, she’ll scream, Sophie will dash to the rescue, and everyone will call her a hero again.

Your sweet little hero is sure to love this next zany Sophie adventure. Sophie the Hero is one of a four-book series about the absolutely awesome adventures of an un-ordinary girl. Once again, illustrator Laura Tallardy adds her own special artistic touch to make the book even funnier, right down to the last outlandish caper.

For laugh-out-loud fun that’s nothing short of awesome–er, I mean heroic, be sure to read Sophie the Hero.